The AVP Dean of Science advises the Heads of Schools on aspects of University regulations and academic procedure as relevant to their remit, and offers informal counsel. They also support Schools’ implementation of their strategies, monitoring and approving developments such as staffing and budgetary changes and the creation and implementation of new policies and procedures.

The AVP Dean of Science supports the development, establishment and leadership of interdisciplinary and cross-Faculty academic initiatives in research, teaching and innovation. 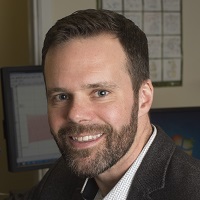 Gareth Miles is a Professor of Neuroscience in the School of Psychology and Neuroscience. Gareth’s research aims to decipher how neural networks within the spinal cord and brainstem generate adaptable movements. In parallel, his work investigates pathological changes in these neural networks, which occur due to injury and disease. Gareth’s biomedical research has a particular focus on Motor Neuron Disease (MND), with the key goal of revealing disease mechanisms and highlighting novel targets for much-needed therapies.

Gareth completed a BTech (Hons) in 1999, followed by a PhD in Neurophysiology in 2003, both at the University of Auckland, New Zealand. Gareth then worked as a postdoctoral research fellow at Dalhousie University, Canada until 2007 when he took up a lectureship and began his independent laboratory, the Neural Control of Movement Lab, at the University of St Andrews. Gareth became Professor of Neuroscience in 2018.

Gareth has previously served as Head of the School of Psychology and Neuroscience (2018-2023) and Director of the Institute of Behavioural and Neural Science (2013 -2018). Gareth is a member of the Euan MacDonald Centre for Motor Neuron Disease Research (since 2008) and a former member of the Motor Neuron Disease Association (UK) Biomedical Research Advisory Panel (2016 – 2020).

Sandra Hughes is the personal assistant to the AVP Dean of Science. Telephone calls and emails to the Dean regarding Decanal business will usually go via Sandra.