The University of St Andrews is known for our rich history as well as our cutting-edge teaching and research.

Find out key information about our traditions, student population and awards here.

Founded in the early 15th century, St Andrews is Scotland’s first university and the third oldest in the English speaking world.

Teaching began in the community of St Andrews in 1410, and the University was formally constituted by the issue of a papal bull in 1413.

The University's motto is 'Ever to Excel', which is taken from a speech in Homer's Iliad.

The crescent moon represents Peter de Luna, the given name of Pope Benedict XIII who issued the bulls of foundation of the University in 1413.

The lion rampant is taken from the royal arms of Scotland and represents the royal authority of King James I (1406–1437) who was associated with the foundation.

The gold diamonds (mascles or) are taken from the personal arms of Henry Wardlaw, Bishop of St Andrews 1404–1440 who issued the original charter which incorporated the Studium Generale in 1411 or 1412.

The open book with the red page edges represents learning.

The blue and silver cross represents the saltire of Scotland. 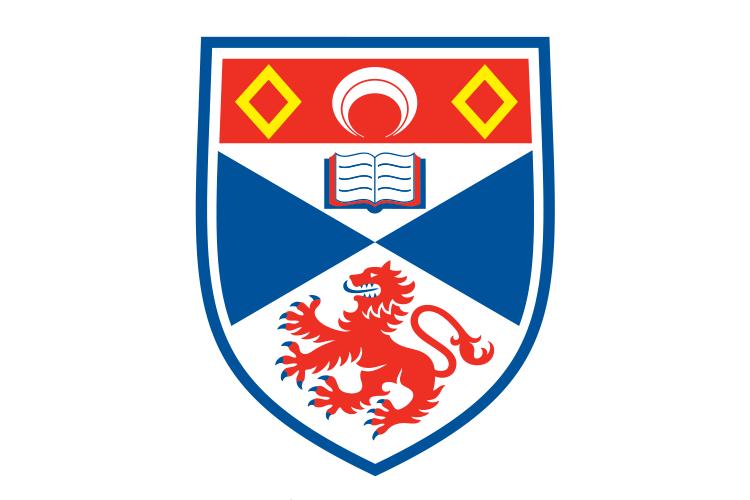 For 2021 entry we received applications from 179 different countries.

Our students have the chance to participate in exciting exchanges or study abroad opportunities in Australia, New Zealand, Hong Kong, Singapore, Canada and the USA.

The University of St Andrews is home to many unique traditions.

There are over 150 student societies ranging from artistic and musical through to religious and cultural.

Sport is a valued aspect of university life – there are over 50 sports clubs and 100 competitive sports teams to choose from.

The University of St Andrews is top in the UK for student academic experience with more than 89% of St Andrews final year students giving the University top marks for the quality of the learning and teaching experience, according to the results of the National Student Survey 2022.

According to the Complete University Guide 2023, students at the University of St Andrews are the most satisfied in the UK.

The University has one of the best first-year retention rates in Scotland. Around 96% of our 2017-2018 entrants continued in their studies at St Andrews; less than 2% transferred to other universities; and less than 3% dropped out of higher education altogether.

The most recent Research Excellence Framework (REF) in 2021 ranked the University of St Andrews amongst the highest quality in the country.

More than 88% of research carried out by the University was classed as world-leading or internationally excellent.

According to the most recent Graduate Outcomes survey (2018-2019), 92% of our undergraduate first-degree level graduates were in either full-time employment or further study.