Responsibilities of the Vice-Principal (Governance) include:

The current Vice-Principal (Governance) is Alastair Merrill. He has held this role since 2015. 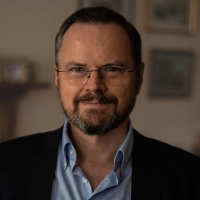 Alastair Merrill joined St Andrews in 2015 from the Scottish Government, where he had spent five years as the Chief Procurement Officer and Commercial Director, leading the transformation of public procurement.

Originally trained as a historian at Pembroke College, Cambridge, Alastair joined the civil service fast stream in 1986, and served in a variety of posts in the Ministry of Defence and the Foreign Office, including secondments to the private sector and the UN peacekeeping force in the former Yugoslavia. In 1996, he left the UK civil service to work as a private secretary to NATO’s Secretary-General in Brussels, advising on NATO enlargement, relations with the former Soviet Union, and refugee issues during the Kosovo crisis.

In 2001, he was recruited as a Senior Civil Servant and moved to Scotland where postings included running Educational Analytical Services, Change Management, Police Policy and as Corporate Services Director in the Scottish Prison Service.

Clea Russell is the personal assistant to the Vice-Principal (Governance). Telephone calls and emails will usually go via Clea.