Welcome to the mediaeval heart of the University of St Andrews.

The hub of life in Scotland's oldest University, the chapel is a rare and beautiful example of Late Gothic architecture. Founded in 1450 as a part of Bishop James Kennedy's College of the Holy Saviour, the Chapel of St Salvator has had a long and varied history.

Originally founded with a missionary as well as an educational function, St Salvator's College stands out among the many similar mediaeval foundations of Europe. Unlike the colleges of Oxford and the continent, Kennedy's institution was very much a part of the local community. Furthermore, it was intended to have a national role through the improvement of the theological education of the Scottish clergy. Thus, unlike the secluded colleges of Oxford, St Salvator's presents its face to the wider world, as can be seen most spectacularly in the chapel.

The main entrance to the chapel faces out onto the street and not into the college courtyard. From its beginnings, the building had a dual role both as the college chapel and as a collegiate church serving the wider community. Despite the violent history of religion in St Andrews, the chapel remains a central focus for worship both within the University and the wider world. Nevertheless, history has left its marks upon the building. 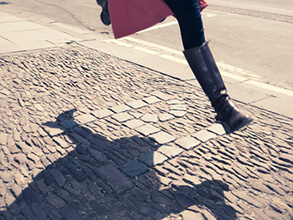 ‌The cobbles beneath the bell tower bear witness to the turbulent events of the 16th century. The initials 'PH' set in to the cobbles marks the site where 24-year-old Patrick Hamilton (died 1528) was burnt at the stake for his Protestant beliefs.

‌Local tradition adds a twist to this gruesome history by suggesting that the mysterious face carved into the stone work of the college tower high above the gateway is that of the martyred Hamilton. Fortunately, St Andrews today is unlikely to treat its students in quite the same way as it did Patrick Hamilton.

The Reformation was not kind to the chapel. The extreme Protestantism followed by the Reformers took a dim view of the ornate, gothic art of the chapel. The Reformers smashed the statues of saints and biblical figures that had filled the canopied niches that adorn the chapel's exterior. They assaulted Bishop Kennedy's tomb and vandalised the stained glass that had filled the interior with brilliance. All 'graven images' were banned by the new Protestant church, with the result that only a shadow of the chapel's mediaeval glory remains. However, the surviving carvings suggest that Kennedy's collegiate church must have been a truly magnificent building.

The chapel passed the next century in a sorrowful state. Terminal decay of the building was only prevented by the chapel's 'second founder', Provost Skene. Skene's efforts in the 1680s were astonishingly successful — he raised a substantial fortune to fund a major rebuilding programme of the college. The chapel and the college tower were both restored as a part of the scheme. Skene's successors did not treat the chapel with the same reverence.

The 1760s and 1770s saw radical alterations to the building, most spectacular of all being the deliberate collapsing of the original stone roof into the chapel with a crash that is said to have shaken the whole town. The next major work to be carried out on the building took place under Provost Playfair in the mid-19th century. Various minor architectural 'improvements' were made, but the most important feature of the restoration was the erection of a massively built 'cloister' to the north of the building.

Playfair's improvements were followed by the work of Principal Forbes in the 1860s. Forbes further embellished the chapel according to the dictates of the prevailing Gothic Revivalist style. Like so many Victorian 'restoration' projects, the result is far from authentic, but the overall effect is dignified and handsome.

The 20th century saw further work carried out on the chapel. The beautiful war memorial in the apse of the chapel is a fitting testimony to those students that were tragically lost in the First World War. Notable work was carried out on the interior under Principal Irvine, thanks to a generous sum gifted to the University by Dr Edward Harkness (died 1930). Under Irvine, new stained glass windows were commissioned from the leading Scottish artists of the day. In addition, Irvine saw that the founder's tomb received much-needed conservation treatment.

Thus the chapel of today is a mixture of old and new. It bears the scars of religious strife and mistreatment but is nevertheless a beautiful, living building much used by the students and staff of the University. It is today very much as it was intended to be by Bishop Kennedy: the heart of the University.