Founded in the 15th century, St Andrews is Scotland's first university and the third oldest in the English speaking world.

has as its main feature a figure of St Andrew upon his cross. Below, are figures representing either a rectorial court or a regent, attended by a bedellus, lecturing to a class of students. Above is a triple canopy bearing the coats of arms of the three founders of the university: in the centre, Pope Benedict XIII (argent, on a chief gules, a crescent reversed of the first); on the dexter side King James I (or, a lion rampant within a double tressure flory-counter-flory gules); on the sinister side, Bishop Wardlaw (azure on a fess between three mascles or, as many cross-crosslets fitchee fules). 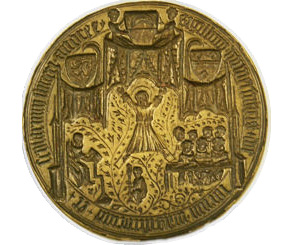 There was a small book produced in connection with the St Andrews University Bazaar in 1895 by James Maitland Anderson, University librarian. In the book, Maitland brought together some ideas about heraldic designs of relevance to the history of the University.

From this, a design was created which was matriculated in 1905 as:

parted per saltire argent and azure, in chief a book expanded proper, in base a lion rampant gules, on a chief of the third a crescent reversed of the first between two mascles or.

This is a heraldic description of the shield which is part of the present coat of arms. 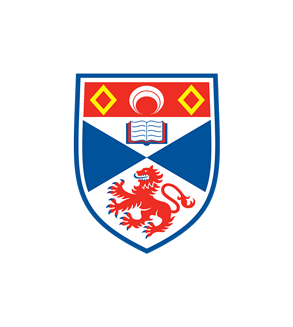 Matriculation of arms of the University of St Andrews, 2006

‌The International Genealogical Congress visiting St Andrews in 2006, which resulted in the University receiving a newly matriculated coat of arms.

The current matriculation of arms includes a colour illustration of the full coat of arms with crest and supporters, as well as a description of the arms in formal heraldic language. 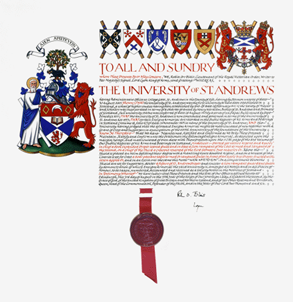 For the first time aien aristeuein (ever to excel) was incorporated into the design as the official motto of the University. It had been used in practice since 1773, when the board still to be seen in the King James library was first put up in Parliament Hall, but it was not officially designated as part of the heraldic insignia of the University before 2006.

‌It is derived from the sixth book of Homer's Iliad, in a speech Glaucus delivers to Diomedes:

Hippolocus begat me. I claim to be his son, and he sent me to Troy with strict instructions: Ever to excel, to do better than others, and to bring glory to your forebears, who indeed were very great … This is my ancestry; this is the blood I am proud to inherit.

The current matriculation of arms includes an illustration of the whole heraldic design and is quite ornate, incorporating two supporters (St Andrew and a lion) as well as a crest with mantling and an apple tree with the boar of St Andrews, under the motto. These seem to represent the tree of knowledge and the town of St Andrews. The original document is preserved within the University's muniment collection.

The symbolism of the elements of the shield are representative of the insignia of the founders of the university as follows: