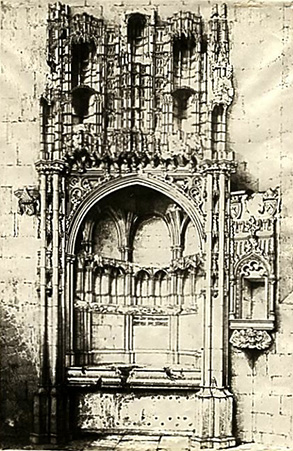 ‌The founder's tomb is an outstanding piece of sculpture. Even after the punishments inflicted upon it by iconoclastic Reformers and misguided restorers, the tomb retains much of its original magnificence. Originally designed for insertion in St Andrews Cathedral, it appears that Bishop Kennedy decided to have it constructed in his chapel sometime between the consecration of the church and his death in 1465. The tomb is set into the thickness of the wall immediately before the apse, so as to be as close to the altar as possible.

The tomb is an elaborate example of Late Gothic sculpture with carved detail characteristic of the Tournai school. However, the grey stone used for the fabric seems to be of Scottish origins. This suggests that either Kennedy employed a Scots mason with experience of continental sculpture, or else imported a foreign artist to carry out the work. In design, the tomb takes the form of a deep, apsidal recess with a lofty, vaulted canopy. The recess contains a great slab of black marble, beneath which is the tomb-chest in which Kennedy was interred. It is possible that an effigy of the bishop reclined upon the slab in quiet repose — until the Reformers stripped the chapel's interior. The back of the recess bears a tier of large, twinned niches, above which are bare panels that may have been decorated with murals. The great, highly ornate canopy and flanking pillars of the structure represents the House of the Many Mansions and would have been filled with a myriad of images. The bold, deeply cut carving of the tomb is unique in Scotland and gives us some idea of its original magnificence.

The surviving carvings are a mere shadow of the tomb's former glory. The Reformers may have stripped it of its statuary, but it was the 18th-century restorers that caused the most damage to the tomb. The deliberate collapsing of the chapel's original stone-slab roof into the building mutilated Kennedy's memorial. Yet, damaged as it is, the tomb of Bishop Kennedy remains a splendid monument to the college's founder.

While the tomb is by far the most impressive example of mediaeval sculpture extant in the chapel, there are also several other noteworthy features. Set into the wall just to the east of the founder's tomb is the Sacrament House. Below this tabernacle is a carving of two angels supporting a monstrance, while above it there are three shields. The middle shield has been completely erased but probably bore the arms of Pope Pius II. The shield to the right bears the royal arms of Scotland while to the left are the arms of Bishop Kennedy.

High on the wall immediately to the left of Kennedy's tomb is another finely carved rendering of the founder's arms. These carvings are very similar to the more substantial relief work to be seen on the college tower. Here again are the arms of the founder held aloft by an angel at either side. The armorial relief is flanked by a pair of great canopied niches, which are delicately carved with foliage; the base of each niche bears a carved face. These are badly worn, but more complete examples can be seen on the porch of the chapel's south door.

Another similar head survives on the base of the niche on the buttress to the left of the central window of the apse. These ugly, bulbous faces may have been designed as guardians to drive off the forces of evil. In addition to the twin faces that glower down upon those entering by the south door, the porch is also decorated with a carved boss set in the centre of the vault that supports the roof. Once again, the founder has clearly marked his collegiate church with his own coat of arms! Kennedy's arms are even carved into the twin leaves of the ancient door below the boss.

While now despoiled of their statues, the niches on the buttresses of the chapel retain several interesting features. The foliate carving on the great niches of the college tower is repeated on their smaller relatives. Furthermore, two of the niches are intriguingly placed so as to be opposite each other — rather than the usual arrangement that places them on the spine of the buttress, looking away from the building. Instead, they are positioned on the sides of the buttresses that flank the most easterly window before the apse. The special treatment of these niches is possibly the result of their close proximity to the altar. They both bear armorial carvings: one carries the arms of the founder, the other the arms of the King of Scots. Besides the royal arms is another carved face, though this one is of a gentler aspect than the others that adorn the chapel's exterior.

Besides the features already mentioned, there are also several fine carvings preserved in the chapel, the position of which within the original layout of the building is unclear. Set against the west wall of the chapel is the tombstone of Provost Hugh Spens who died in 1534. This memorial is important as it bears the only known illustration of the garb of a Scottish mediaeval academic. Near to Spens' memorial, tucked away in an open recess originally constructed as a tomb (c.1500) are several fragments of sculpture. One of these pieces appears to be a statue of the virgin and child that may have formerly adorned one of the niches on the chapel's exterior. The other fragments include a depiction of the circumcision and a rendering of the annunciation, which may have formed part of the chapel's interior decoration.

It is a tragedy that so little of the original sculpture that once adorned the chapel has been preserved. Nevertheless, the carvings that survived the vandalism of the Reformers and the 18th-century restorers bear silent witness to the Gothic splendour of Bishop Kennedy's collegiate church.