The architecture of St Salvator's Chapel 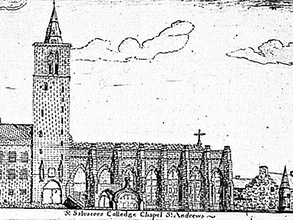 ‌The collegiate church founded by Bishop Kennedy is a fine example of late Scottish Gothic architecture. Constructed of squared rubble masonry, it is a long, aisleless building ending in a three-sided apse. Originally, the structure was surmounted by an immense barrel vault and stone-slab roof, though this was replaced in the 18th century by a lighter covering of wood and slate designed by James Craig. A local example of a stone-slab roof may be seen at the Blackfriars Church in St Andrews. The great weight of the stone roof was supported by the substantial but well-proportioned buttresses. These survived and were ornamented with canopied niches that housed carved statues of saints and biblical figures — until the Reformers tore them down.

The impressive south wall of the Chapel is divided into seven bays by these buttresses, a pattern that continues around the apse at the east end, creating ten bays in all. The main entrance to the Chapel lies between the buttresses of the second bay (counting from the west end of the building). The space between the buttresses is vaulted over to form a porch. The doorway itself, like the two smaller entrances in the north wall, has a semi-octagonal head. This is a feature that can be seen in other University buildings both ancient and modern. In contrast to the grand south wall, the north wall of the Chapel is a solid mass of masonry, unpierced but for the two small doorways already noted. This design is a result of the relationship between the Chapel and the original college buildings. The doors in the north wall provided access to the two-storey college cloister beyond.

The most impressive feature of the building is the college tower. Rising up above the main entrance to the old college, the tower was originally finished with a flat summit. Thus it closely resembled the ancient tower of St Rule incorporated into Bishop Kennedy's cathedral. However, a stone spire was added in the mid-16th century. One suspects that this addition had more to do with preventing a repetition of the events of 1547, when the tower was used as a gun emplacement, than out of any aesthetic motivation. The college tower is a severe yet effective piece of architecture. Ornament is used with elegant restraint. At its base, the archway giving entrance to the college court is surmounted by a richly carved panel depicting the arms of Bishop Kennedy supported by two angels and flanked by tall canopied niches. Above this group the tower rises plain and unadorned to the stringcourse upon which the belfry openings rest. There are tall, twin openings on each face of the tower. A clock seems to have been a feature of the tower from the earliest times, and it is likely that it was situated much as it is today, immediately below the belfry.

Although the main architectural features of the church are essentially unaltered, there have been substantial changes made to the details of the building. The 'cloister' built on to the north wall in the mid-19th century is perhaps the most striking modification. Built in two phases, the first supervised by Robert Reid and the second by William Nixon, the cloister is a heavy, gloomy construction with neither the grace of the Chapel nor the practicality of its mediaeval predecessor. Indeed, it is interesting to note that a feature of Principal Forbes' restoration (c.1861) was the use of glazing to enclose the cloister for use as a study room. Almost unnoticeable but of far greater significance than the cloister was the reconstruction undertaken in the 1680s by Provost Skene. The impressive sum of £12,000 was raised by Skene to fund major repairs to the college chapel and tower. Were it not for Skene's intervention, it is unlikely that the Chapel would have survived to the present day.

Apart from the dramatic events involved in the replacement of the old stone-slab roof in 1773, most of the other changes to the Chapel have been ornamental in nature. The finials that top the buttresses today are Victorian additions (c.1860), as is the parapet around the base of the spire. Yet despite these cosmetic changes, the Chapel retains much of its original gothic splendour. It is a very beautiful building and is of major significance to the history of Scottish mediaeval church architecture.

For a more in depth treatment of the Chapel's architecture, see RG Cant's The College of St Salvator.