Gender equality is a critical driver for excellence, innovation, and growth; and gender pay gap figures provide a tangible measure over time of how an institution engages with gender equality in the workplace.

There are many actions that we are taking to promote fairness and inclusivity at St Andrews: revisions to our recruitment and promotion structures; a new mentoring programme for senior academic women; implementation of flexible working patterns; and expansion of our childcare provision. However, the most fundamental change we can make is to increase transparency about gender pay differences.

I believe that by publishing our gender pay gap data and discussing what it shows and how we can most effectively deal with that, we can work to remove the gender pay gap at St Andrews and contribute to a wider socio-economic debate. Please join with me in doing that.

This is a new report on the gender pay gap at the University of St Andrews as at 31 March 2017, utilising a framework provided by the UK Government.

The University of St Andrews has published information on Gender pay by salary band since 2013, in line with the 2012 Scottish Specific Duties under the 2010 Equalities Act, as part of the biennial Equality Mainstreaming Reports.

In 2017, the UK Government introduced new regulations requiring all organisations with more than 250 staff to calculate and publish their Gender Pay Gap data.

The Gender Pay Gap is the difference between the average hourly pay of men and women across the whole organisation. It is not the same as the concept of Equal Pay which means that men and women in the same organisation are paid the same rate for like work as set out in the Equality Act 2010.

Although these new regulations do not apply to employers in Scotland and Wales, the University of St Andrews has produced a gender pay analysis, which is published on the UK Government’s dedicated website, that will allow direct and meaningful comparison with those organisations, including almost 200 universities.

The information in this report provides the mean and median gender pay gaps for the organisation as a whole, and broken down by grade. Figures have been calculated using the technical specifications set out by the UK Government Equalities Office and are not directly comparable with the previously published figures. Historically, the University published gender pay gap data by grade, and used a methodology that looked at basic annual salary, as opposed to the hourly rates of pay required by the UK Government guidelines. The latter also require the University to take into account allowances, pay for leave, and any salary sacrifice payments being deducted.

The University’s gender pay gap figures as at 31 March 2017 are as follows:

The mean, hourly rate is calculated by adding all of the hourly rates together and dividing by the number of individuals in the data set.

The pay gap is the average difference between the mean hourly pay rate of men and women.

The ‘median’ hourly rate is calculated by arranging the hourly rates of all individuals in the data set in numerical order to identify the middle (or median) hourly rate.

50% of individuals will earn more than this hourly rate and 50% will earn less.

The median gender pay gap is the difference between the mid-point hourly pay rate of men and women.

Proportion of women in each pay quartile 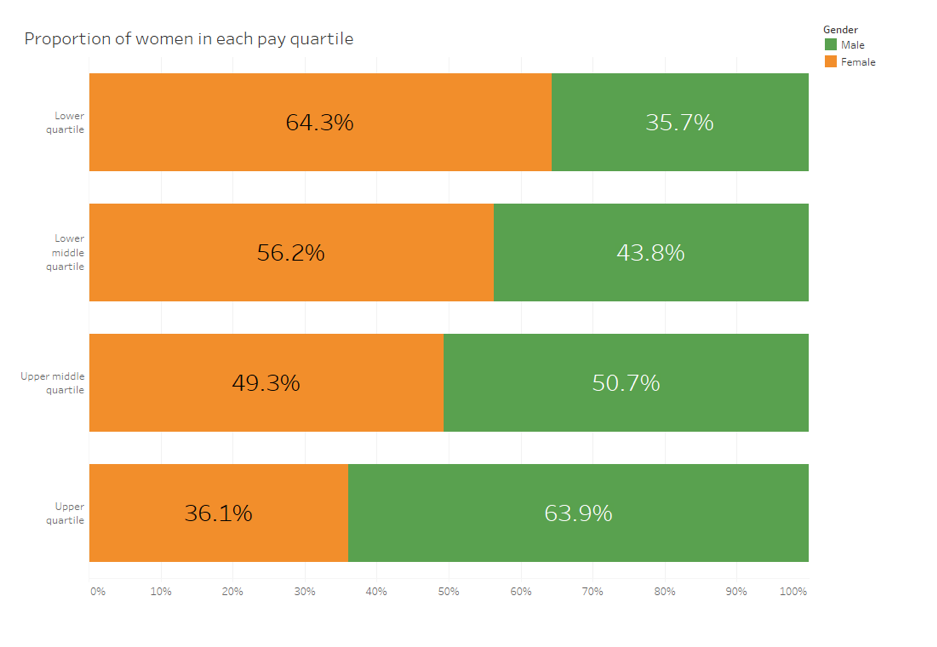 This figure shows the percentage of men and women in each quartile.

The University has no contractual bonus arrangements.

What the figures tell us

The University has undertaken an analysis by contract type and grade to provide a more granular overview of the data. These figures are shown in tables at the bottom of this page.

The pay gaps identified mainly derive from a disproportionately small number of women in more senior University roles. Over 64% of staff in the lower pay quartile are women, and only 36% in the upper quartile. The middle quartiles are closer in gender distribution.

The University is committed to removing the gender pay gap over time, and is taking the following actions:

These actions are the starting point for addressing gender pay differentials within the University. The University, through its Strategic Plan and through annual reporting, is committed to making progress rapid, meaningful, and visible.