The sensitivity of NMR spectroscopy to the local environment makes it an ideal tool for the characterization of disordered materials. Computational prediction of NMR parameters can be help in the interpretation and assignment of the complex lineshapes that are seen in NMR spectra of solids, but understanding all possible chemical environments that might be present in a disordered material is very challenging.

In work published in J. Am. Chem. Soc. 141, 17838 (2019) and funded by ERC, we used an ensemble approach to determine all possible arrangements of atoms within a solid, to study at Y2(Sn,Ti)2O7 – a pyrochlore material with potential applications in the storage of radioactive nuclear waste. We then determined the relative energies of the hundreds of potential structures, calculated NMR parameters for each model using DFT and simulated the NMR spectrum by summing some or all of the models to compare to experimental measurements. This allowed us to determine which atomic arrangements are present in the real material, and how/if different types of atoms are clustered or ordered. Ultimately, this will research will provide insight into structure-function relationships and help researchers to design better materials for the modern world.

Understanding the Role of Large-Scale Galactic Flows in Star Formation

Observations show that stars form inside dense and cold gas structures named molecular clouds. These clouds can be several light years wide and can have masses up to a few million solar masses, at least in our Milky Way. These clouds typically lie on the plane of the galaxy. The gas in molecular clouds has a temperature near 10K and are traced by the emission of the 12CO molecule in the J=1-0 line. Molecular clouds are expected to be mostly composed of H2, but they may contain other molecules and dust particles. On the other hand, the warm gas in a galaxy is mostly composed of atomic hydrogen, distributed in a disc an in the same plane as the stellar disc. For example, our Milky Way disk has a radius of approximately 50000 light years, so most of the galaxy’s gas is distributed over a large scale compared to the typical sizes of molecular clouds. However, stars form on scales smaller than a few light years. This brings us to the following question: what is the role of large-scale galactic gas motions in the formation of stars? To address this question, we have to study the interplay of several mechanisms that can drive gas from the large galactic scales to the smallest scales of molecular clouds, where stars form. Observations show that many galaxies have spiral arms, which tend to be traced by dense molecular clouds and star forming regions. This indicates that the large-scale structure of the galaxy plays an important role in the process of star formation. However, the exact dynamics of the gas in an arm will be sensitive to the nature of the underlying spiral arms (density waves or dynamic arms). Therefore, in order to understand star formation from a galactic perspective, we have to explain how spiral arms drive the formation of molecular clouds. Computational simulations are best suited to address this problem. 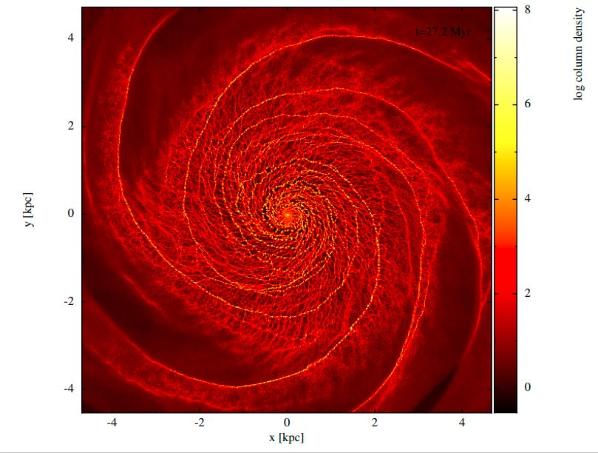 We have developed global galaxy simulations inspired by the Local Group galaxy M33 (also known as the Triangulum Galaxy). We have simulated both an N-body realisation and a spiral potential simulation, as these allows us to study the formation of clouds in different spiral arm scenarios. In both models, the gas is simulated using the smoothed particle hydrodynamics (SPH) method. We have simulated both models using 2 million and 30 million gas particles, providing mass resolutions down to 675 and 45 solar masses. We have also produced a third realisation of the N-body model with 100 million particles (mass resolution of 13.5 solar masses).

Formation of a molecular cloud during simulation

Magnetic Heating of the Solar Corona

The largest and hottest part of the solar atmosphere, the corona, reaches temperatures of over 1 million K, and is more than 100 times hotter than the Sun’s surface. Although we can’t usually see it directly, the evolution of the solar corona can have significant consequences for our life on Earth. For example, eruptive events can fire huge quantities of energetic particles into the solar system which can be hazardous for air and space travel. In order to investigate the behaviour of the solar atmosphere, we use numerical codes run on the HPC facilities in St Andrews. 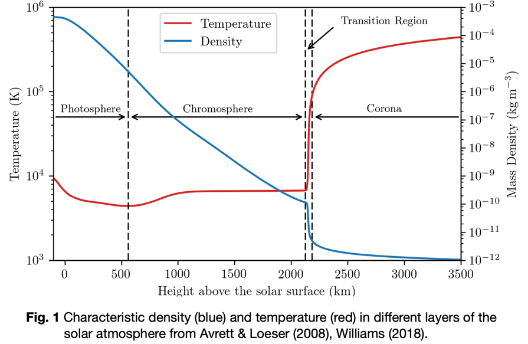 One long-standing scientific problem concerns how the high temperatures of the corona are maintained (red curve in Fig. 1). The source of the required energy is convective motion at the solar surface. This stresses the coronal magnetic field (producing currents) and will ultimately lead to energy release and heating. In Howson et al. 2020, we presented how different types of motion at the solar surface can lead to different amounts of heating in the solar corona. In Fig. 2, we show the relative sizes of currents that are produced by different motions at the solar surface. In particular, if the velocity profile changes slowly (long time scales), we will typically observe larger currents and more heating than if it changes rapidly (short time scales). 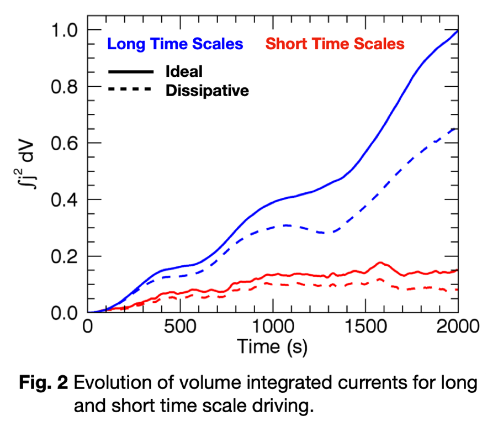 We are now investigating how the solar atmosphere responds to this heating. We see that currents form along long thin magnetic structures in the solar atmosphere (Fig. 3). This produces heating of coronal plasma along thin magnetic strands (Fig. 4 and movie) and drives upflows of plasma from the lower atmosphere. We are determining how this would appear to solar telescopes (e.g., https://sdo.gsfc.nasa.gov/) in order to establish whether we can identify and classify heating events in real life observations. 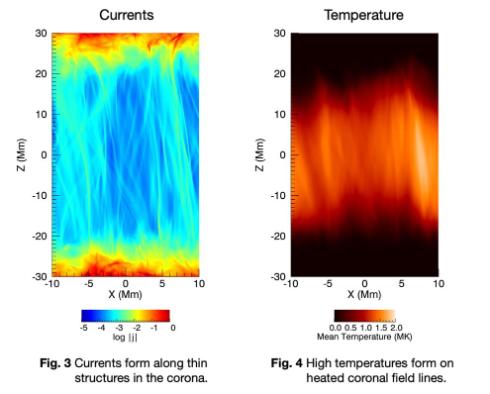 Evolution of the coronal temperature during a numerical simulation of the solar atmosphere.