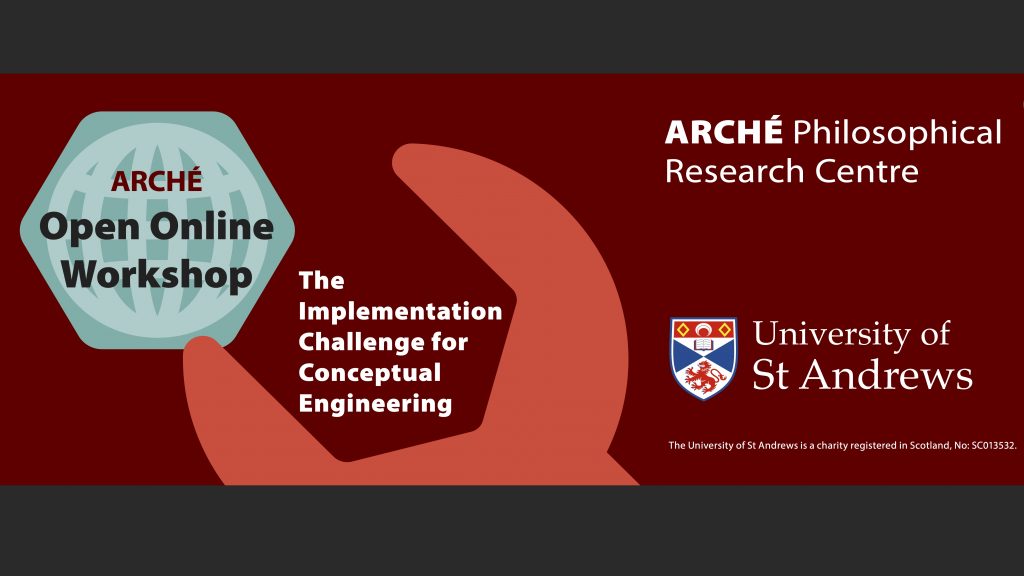 CONCEPTUAL ENGINEERING is an exciting new movement in analytic philosophy that focuses on assessing and improving our conceptual schemes and repertoires. The ICCE Open Online Workshop takes the next step and addresses the issue of how to implement on the ground the ameliorative strategies that conceptual engineers may have come to advocate for. To date, the implementation challenge for conceptual engineering has been formulated (Cappelen and Plunkett 2020, Deutsch 2020), but never specifically addressed, except in a couple of very recent or forthcoming works (Fischer 2020, Koch forthcoming, Machery forthcoming). By systematically investigating its ramifications, the workshop aims to contribute to a better understanding of what conceptual engineering practically amounts to as a method to apply to specific case study.

The OOW-ICCE will run over two days, divided into four sessions. Each session will include three 45-minute talks, including 20 mins for the Q&A, plus a final 30-minute round table.

#03 | Manuel Gustavo Isaac (Swiss NSF/University of St Andrews): “Reshaping the World: An Empirical Method for Applied Conceptual Engineering (EMFACE)” — Conceptual engineering is a groundbreaking programme in philosophy that focuses on how to best assess and improve our concepts. Yet, it still lacks an actionable framework in order for its case studies to be run effectively. And without such implementation strategy, it will never live up to its proclaimed ambitions: Changing people’s minds and the narratives that shape our world so as to make tangible differences in the face of the big issues of our times. The rationale for the EMFACE Project is to overcome this applied knowledge gap. Its overall goal is to make conceptual engineering an effective tool to achieve real-world changes with measurable impact. This talk outlines the EMFACE Project with a focus on its theoretical and applied objectives.

#04 | Mark Pinder (Open University): “How Challenging is the Implementation Challenge?” — Various recent discussions of the implementation challenge start with assumptions about the kind of linguistic mechanisms that underpin conceptual engineering. However, in this talk, I approach the issue from the opposite direction. I consider three kinds of projects that might invoke conceptual engineering, and look for linguistic mechanisms that make each of those projects implementable. I close by considering, in each case, how challenging implementation is.

#05 | Katharine Jenkins (University of Glasgow): “Dangerous Talk: Gender Kinds, Trans Oppression, and Covert Exercitives” — Some gender theorists advocate what I will term ‘the metaphysical constraint’: the claim that the correct account of the ontology of gender kinds must entail that all trans people are members of the gender(s) they identify as, and that no trans people are members of a gender other than the gender(s) they identify as. However, recent work on the way that social categories can be oppressive in and of themselves fatally undermines the main arguments for accepting the metaphysical constraint. I will argue that, although we should reject the metaphysical constraint, articulating theories that contravene the metaphysical constraint is liable to cause harm. One way this can happen is through the covert activation of social norms via a type of speech act which Mary Kate McGowan terms ‘covert exercitives’. This gives rise to a puzzling difficulty for gender theorists concerning whether and how to talk about gender kinds that may be trans-exclusionary.

#06 | Zoë Johnson King (University of Southern California): “Reluctant Heroes” — This is a short case study of an attempt at conceptual engineering that took place over the Summer of 2020: the attempt to stretch the concept HERO by applying it to essential workers. This attempt was moderately successful, in that the term ‘hero’ did come to be widely applied to essential workers. But it was only moderately successful; there was a lot of pushback, mostly from the very individuals to whom the term was being newly applied. I think that some ideas from the philosophical literatures on virtue and motivation — especially the ideas of supererogation and of volitional necessity — can help us to understand both the nature of this attempted change to our concept and the rationale behind the resistance to it.

#07 | Rachel Sterken (Hong Kong University): “Generics and Metalinguistic Negotiation” [Joint work w/ David Plunkett and Tim Sundell] — In recent work, two of us (Plunkett and Sundell) have developed the idea that some disputes are “metalinguistic negotiations”. In a metalinguistic negotiation, speakers disagree about normative issues concerning language, such as issues about what a given word should mean in the relevant context, or which of a range of related concepts a word should express. It’s perfectly possible for speakers to communicate such disagreements explicitly, by saying things like “we should use language in such-and-such a way” or “we should use term X to express such-and-such concept”. In a metalinguistic negotiation, by contrast, speakers argue about such issues implicitly. They do so via competing “metalinguistic” usages of terms, wherein speakers seem to use (rather than mention) words to communicate views about the very words they are using. In this paper, we consider how this picture of metalinguistic negotiation interacts with a particular class of disputes that has received significant philosophical attention in recent years: namely, disputes involving generics. We argue that some disputes involving generics are best thought of as metalinguistic negotiations, and that these cases can be illuminating in the context of the more general literature on generics. Part of the aim of this paper is simply to put these cases on the table, and highlight the need for a theory of generics to account for them. We have three additional, more ambitious goals as well. The first is to argue that a particular theory of generics does the best job of accounting for these cases – namely, the sort of “contextualism” about generics that one of us (Sterken) has developed in other work – in combination with the tools we get from the other two of us (Plunkett and Sundell) about metalinguistic negotiation. Second, we argue that this result helps bolster the overall case for the importance of the idea of metalinguistic negotiation as a tool within philosophy of language. Third, we argue that our discussion has some interesting upshots for philosophical methodology, stemming from the fact that significant parts of philosophical discourse involve generics. Finally, we conclude with some reflections on what our discussion means for normative issues in “conceptual ethics” and “conceptual engineering” about the use of generics, such as normative arguments for or against the use of generics in different contexts.

#08 | Anuj Puri (University of St Andrews): “Conceptually Engineering Privacy” —  In the age of Big Data Analytics and Covid-19 Apps, the conventional individualistic conception of privacy that was designed to safeguard a person from unwarranted social interference is incapable of protecting her autonomy and identity when she is being targeted on the basis of her interdependent social and algorithmic group affiliations.  In order to overcome these limitations, I develop a framework for group right to privacy, which is based on privacy as a social value.

#09 | Eugen Fischer (University of East Anglia): “What Can Humpty Dumpty Do? An Empirical Answer to Alice’s Question” — This talk empirically raises and examines the question of ‘conceptual control’. Conceptual engineering frequently involves giving new senses to familiar words, through normative explanations. Such efforts enhance, rather than reduce, our ability to reason properly, only if we are able to abide by the relevant explanations, in language comprehension and verbal reasoning. This talk draws on findings from psycholinguistics and experimental philosophy, to examine to what extent we possess such ‘conceptual control’ over new senses.

#10 | Alison Duncan Kerr (University of St Andrews): “After ‘Sex’” — The received way of differentiating sex and gender is to understand gender as a social construct and sex as a biological property. I aim only to address a tiny but significant slice of this literature—how to define ‘sex’ (and related sex terms like ‘male’, ‘female’, ‘intersex’, and any other sex category terms that might be affected by a definition of ‘sex’). I aim to undermine this picture of one’s sex as an objective biological property of a person. In addition, I argue that the concept of sex is defective. Biologists have long known that there is no single such thing as biological sex. Instead, there is a mishmash of five overlapping criteria for sex, and they often do not agree. Feminist theorists need to recognize this scientific result and then engage in the conceptual engineering conversation about which concept or concepts of sex are the best ones for use, which seems fairly urgent given the political climate. However, any conceptual engineering proposal for ‘sex’ is going to encounter what is known as the implementation challenge: how best to get people to make the recommended change. I argue that an emphasis on deferral to experts, which is familiar from semantic externalism, is a good solution to the implementation challenge for this project. Nonetheless, there are worries about the compatibility of semantic externalism and conceptual engineering, and I offer a reply to these.

#11 | Elizabeth Cantalamessa (University of Miami): “Conceptual Pluralism and the Implementation Challenge: Lessons from the Disability Rights Movement” — In this paper I argue that conceptual engineers should also be conceptual pluralists. I’ll first show how the collective actions of the Disability Rights Movement and Disability Studies’ scholars have been essential in engineering the concept ‘disability’ from a purely medical diagnosis to a multifaceted social and political identity. My argument is motivated by the actual change we can observe in various legal communities regarding disability concepts and laws. The shift in legal communities from deferring to doctors under the medical model of disability to deferring to people with disabilities under the social model of disability, should be understood as a real-time instance of conceptual engineering. I’ll conclude by giving a general outline of the features that enabled the successful (but in no way complete) implementation of revisionary disability concepts and suggest that conceptual engineers have good reasons to prefer conceptual pluralism.

#12 | Catharine Saint-Croix (University of Minnesota): “When is the Implementation Challenge? Field Notes from the Engineering of Sexual Orientation“. — We tend to assume that the implementation challenge for conceptual engineering comes after the engineering. We do the careful design work, refining a concept until it meets the needs we’ve identified, and once that work is complete, we set out to implement change. But, this siloed description oversimplifies. To see this, we look to academic and popular efforts in the conceptual engineering of sexual orientation. As we’ll see, there are two clusters of simplification. First, the conceptual schemes designed in these efforts depend on the contexts in which they are to be offered. Bluntly put, Tumblr and the GOP are not uniform with respect to their ability to adopt new and improved conceptual schemes, especially in this case. Second, the connection between the intended and actual consequences of adopting a proposed scheme is tenuous at best. This is clear from the distance between proposed conceptual schemes for meeting the same goals and the disagreement between the goals to be met by strikingly similar conceptual schemes. From these observations, I argue that we ought to be pluralistic about conceptual orientation, at least in our experimentation and iteration across communities, and that the implementation challenge should be understood as part of the design process — we cannot design concepts unmoored from contexts.