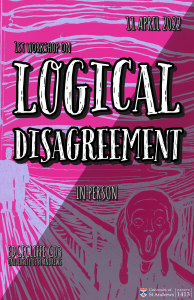 Over the past fifteen years the epistemology of disagreement has been one of the most widely discussed research topics in epistemology. A special case of disagreement is logical disagreement, i.e. disputes regarding the validity of certain inferences, or the status of fundamental logical principles. This one-day Arché workshop is dedicated to the topic Disagreement in Logic and related issues such as logical pluralism, the normativity of logic, logical evidence. It will feature renowned experts of the epistemology of logic as well as early-career researchers.

Venue: G03, Edgecliffe
Time: From 9am till 6pm on Monday April 11th, 2022 (GMT)
Format: In person
Registration:  Please register your interest in attending by emailing our workshop organisers at fja4@st-andrews.ac.uk.

Alessandro Rossi—The Contingently Non-Concrete. Or Real Rivalry in the Simplest Quantified Modal Logic
Constant domain S5, or the Simplest Quantified Modal Logic, seems to demand that we take (non)concreteness as a contingent feature of things. But could there be two equally correct views about the ontology of the contingently non-concrete? It is shown that a similar thesis incurs a principled and necessary refutation. Three objections to our claim are then considered and all are found wanting.

Claire Field—Rational Incoherence for Logical and Non-Logical Requirements
If logical pluralism is true, then rational disagreement about logic is possible. Is rational disagreement also possible if logical pluralism is false? That is, is it possible to rationally disagree about which is the correct logic, while also being mistaken? Some have thought not, and that it must always be irrational to believe falsely about what is rationally required (Titelbaum 2015). In so far as the correct logic encodes what is rationally required, this means that mistakes about it cannot be rational. I compare this question to analogous one about non-logical requirements of rationality, and show how answering it is somewhat more complicated for logical requirements, because of the possibility that weighing one’s evidence implicates a background logic. I explore a proposal for treating mistakes about logical and non-logical requirements in the same way, and argue that this gives us reason to think that level-incoherence is sometimes rationally required.

Frederik J. Andersen—Logical Akrasia
The aim of this paper is twofold. First, §1 and §2 introduce the novel concept logical akrasia pace analogy to epistemic akrasia. Second, §3 and §4 present a dilemma based on logical akrasia. From a case involving the consistency of Peano arithmetic and Gödel’s Second Incompleteness Theorem it’s shown that either we must be agnostic about the consistency of Peano arithmetic or akratic in our logical theorizing. It will then be left as an open question for future research what consequences the dilemma has for epistemic rationality.

Jc Beall—Classical logic is dead. Long live classical logic
An account L of logical consequence (henceforth, of logic) is subclassical if and only if