Workshop on Identity and Individuation of Particulars and Universals 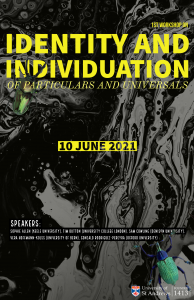 The University of St Andrews’ Arché Philosophical Research Centre for Logic, Language, Metaphysics, and Epistemology will host a one-day online workshop on Identity and Individuation, which will take place on June 10th 2021, 12:30PM-7PM (British Summer Time).

Programme
(N.B. Details to access the workshop can be found at the bottom of this webpage)

Title: Getting precise on indiscernibility

Abstract: “Are there indiscernible but distinct objects?” That question is imprecise, in at least two regards:

First: there are many notions of indiscernibility. For example: we say (roughly) that two objects are two-symmetricaliff you can swap the objects without affecting the overall structure. (More precisely: a and b are two-symmetrical iff there is an automorphism mapping a to b and b to a.) We say that two objects are Leibniz-indiscernible iff they stand in exactly the same relations to all entities. These are distinct notions. When asking questions about indiscernibility, we need to know which notion we have in mind.

Second: every notion of indiscernibility makes reference to a background language, with regard to which discernment occurs. When asking questions about indiscernibility, we need to choose a particular language. Which language we choose might depend on our purposes. For example, if we are interested in our ability to refer (determinately) to one entity rather than another, we should presumably choose a language we can acquire and manifest. By contrast, if we are interested in whether there are “metaphysically” indiscernible entities, we will have to assume there is a metaphysically privileged language.

To see why this matters, I will run through the question “Are there indiscernible but distinct mathematical objects?” It transpires there is a “cheap” to a version of the identity of indiscernibles (with the most demanding notion of indiscernibility); and it is not obviously too cheap.

Title: Sortalism, Token Identity, and the Conception of a Particular

Abstract: The conflict between sortalism and token identity between the mental and the physical is not unexpected: the former requires that the individuation of events or objects be based somehow on their type, their essence or the properties which they have, while the latter maintains that particulars can be identified across disparate domains regardless of type. In this paper, I consider the prospects for resolving this dispute, or for rejecting sortalism and characterising particulars in a way which is compatible with token identity.

Title: An Argument for the Identity of Indiscernibles

Title: Interventionism and the Individuation of Properties

Abstract: Under what conditions is a property P identical with a property Q? Interventionist theories of causation and causal models provide a prima facie plausible answer to this question: P and Q are identical iff they (or the variables representing them) assume exactly the same position in all possible causal models. This criterion is problematic, however, if properties are individuated hyperintensionally, that is, if there are properties P and Q that are distinct, but instantiated by the same individuals in all possible worlds. In this paper, I argue that causal modeling frameworks can overcome this difficulty if the dependence relations occurring in them are characterized in terms of counterpossible conditionals.

Title: Haecceitism by the Numbers