The School of Divinity has had its home in St Mary’s College since the 16th century. It has many fine historic rooms and buildings.

Most of the undergraduate and postgraduate teaching in Divinity is conducted in the College’s three lecture rooms and three seminar rooms. Research seminars are held in St Mary’s College Hall, a wood-panelled hall housing some of the University’s 18th-century furniture.

The King James Library (see more below) houses an excellent collection of theological and biblical studies texts, complementing the extensive holdings in the main University Library. It was originally bequeathed by King James VI and I in 1612 and continues to be the main reading room for Divinity students. You can read more about its history below.

Much of St Mary’s College’s social life revolves around its three common rooms: 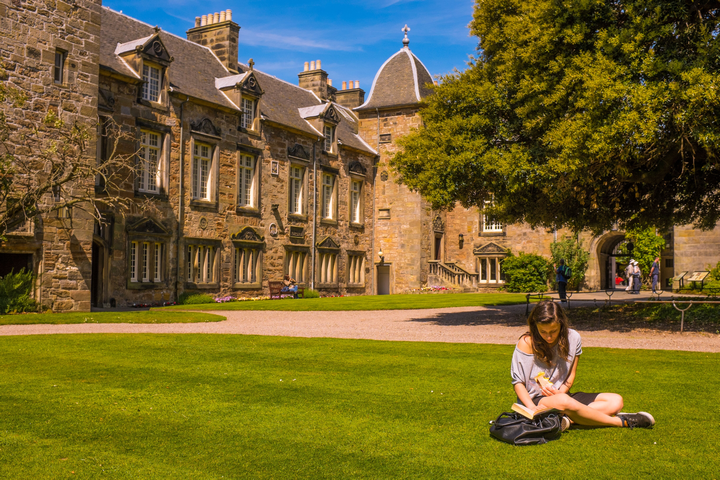 The Roundel is the dedicated study centre for research postgraduate students in Divinity. A historic, A-listed 16th-century building close to St Mary’s Quadrangle, it has shared offices for up to 50 postgraduates, a common room, a kitchen, and a walled garden. 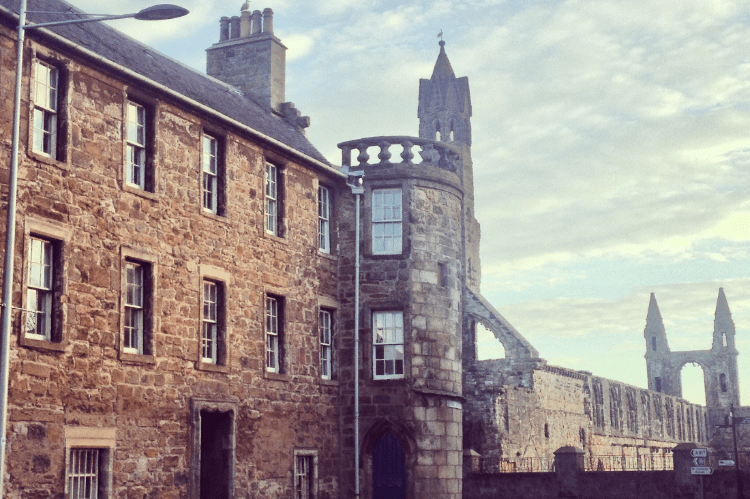 The King James Library was built on the site of the medieval College of St John - the place where in the early 1400s teaching had begun in St Andrews. The building dates from the 17th century, although fragments of the original college were incorporated into the present structure.

It is named after King James VI and I who provided initial funding for the construction project. His mother, Mary, Queen of Scots, had written a will bequeathing her Greek and Latin books to the University for the founding of a common library, and it's possible that James was persuaded to take this vision forward.

James promised sufficient finance to enable work on the library to start; however, funding problems were to mean that construction was not completed until 1643. The building comprised a lower hall, which was used as a teaching room, together with an upper hall, which was to accommodate the books. James and other members of the Royal family donated a sizeable collection of books to help establish the library - most of these are still in the University Library's Special Collections.

Due to an outbreak of plague in Edinburgh, the Scottish Parliament met in the lower hall of the library. Thereafter the room became known as Parliament Hall (it is still used as a debating chamber by the University's Debating Society).

The notable scientist James Gregory had his workshop in the upper hall (the King James Library). He had been appointed as Regius Professor of Mathematics by King Charles II and was given the library as a workspace as he had no affiliation to any particular college and this was the only common University building at that time.

Although he was relatively little-known in his day, Gregory's work has recently been re-evaluated and he is now credited with some major scientific discoveries:

His work in this area set in train a longstanding interest in astronomy in the University, one mark of which is a wooden meridian line which was set into the floor of the library in 1748. This was used in conjunction with a metal bracket for a telescope (still in place outside one of the library's windows): an astronomer could line these up with a stone pillar that had been positioned on the horizon exactly due south of the library in order to achieve a high degree of accuracy in their observations.

As the University had a legal deposit right, entitling it to claim a copy of any book registered under the 1709 Copyright Act, finding sufficient space for books was a continual challenge. By the 1760s, shortage of space was such a problem that it became necessary to extend the King James Library by raising the height of the walls and inserting a gallery. Other than its fixtures and fittings, the appearance of the library has not changed very much from the remodelling at this time. Dr Johnson admired the finished room as an 'elegant and luminous chamber' on a visit described in his A Journey to the Western Islands of Scotland in 1773. John Wesley also visited (in 1776) and described St Mary's College as having a handsome library.

The library was used as the setting for a short story, "The Library Window" by the well-known Scottish author Margaret Oliphant.

Due to constant pressure for more book space, the building was further extended to the south (the present Psychology building). Eventually, the stock outgrew the site and a new University Library building was opened on North Street in 1976. The King James Library then became a dedicated Divinity library.

Read more about the history of the University Library. 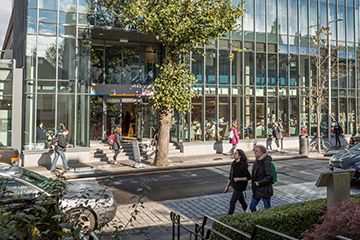