About the School of Physics and Astronomy

The disciplines of physics and astronomy have been studied in St Andrews for more than 350 years. Today, the School of Physics and Astronomy aspires to be a beacon for outstanding research and teaching, and one of the top places to study the subject in the UK.

The School is relatively small compared with many physics departments, helping it support a close community of staff and students. It is committed to be an inclusive environment promoting creativity, originality and the wellbeing of staff and students, and has held IOP Juno Champion and Athena SWAN Silver awards since 2017.

The School is an active member of the Scottish Universities Physics Alliance (SUPA), the largest pooling of physics researchers in the UK, leveraging the benefits of scale in the SUPA Graduate School.

The School aims to carry out world-leading curiosity-driven research which both pushes the boundaries of fundamental science and is of high impact, with national and global benefit. Its research is internationally known in each of its three strategic research themes: photonics, condensed matter physics and astronomy. Much of the research is highly collaborative and interdisciplinary, including activities in functional materials, biophysics and exoplanetary science. In the most recent national assessment of research excellence, REF 2014, the School was ranked third in the UK (in a joint submission with the University of Edinburgh) for research quality in physics and astronomy.

The School strives to provide an education of the highest quality for both undergraduate and postgraduate students, developing the skills and knowledge for a successful career in industry, business or academia. It offers modern teaching facilities and desirable student-to-staff ratios, with all undergraduate degrees accredited by the Institute of Physics. The School has regularly been highly placed in university league tables, and was ranked top in the UK for Physics and Astronomy by the Guardian University Guide 2020, the Complete University Guide 2020 and the Times Good University Guide 2020.

The School's teaching portfolio includes a number of BSc (three to four years) and MPhys (four to five years) degree programmes, plus MSc programmes in Astrophysics and in Photonics and Optoelectronics Devices. PhD and EngD students in the School benefit from a wide range of technical and skills courses within the SUPA Graduate School, with some postgraduate students also trained within discipline-specific Doctoral Training Centres.

The School is based in the J.F. Allen building and the University Observatory, which together house all research and teaching in physics and astronomy. The School has a number of advanced research facilities, including:

The School also owns three one-metre robotic telescopes within the Las Cumbres Observatory Global Network. Many of these facilities offer access to external users from universities and industry.

Physics and Astronomy research in St Andrews has a long history, dating back to the mid-17th century, when James Gregory, inventor of the reflecting telescope, established a university observatory and made pioneering studies of light including the first recorded observation of diffraction. Sir David Brewster (Principal of the University, 1837-1859) was a Victorian pioneer in optical materials and the polarisation of light (including Brewster's angle). He was also an innovator and champion for the public engagement of science, and invented the kaleidoscope and a practical version of the stereoscope (the Victorian forerunner to the virtual reality headset).

The recent history of the School however starts from the 1940s with the appointment of Professor Jack F Allen FRS to the Chair of Natural Philosophy, and the founding of the University Observatory by Dr Erwin Finlay-Freundlich. The Astronomy and Physics departments were separate entities until 1987 when they were combined to form the current School. 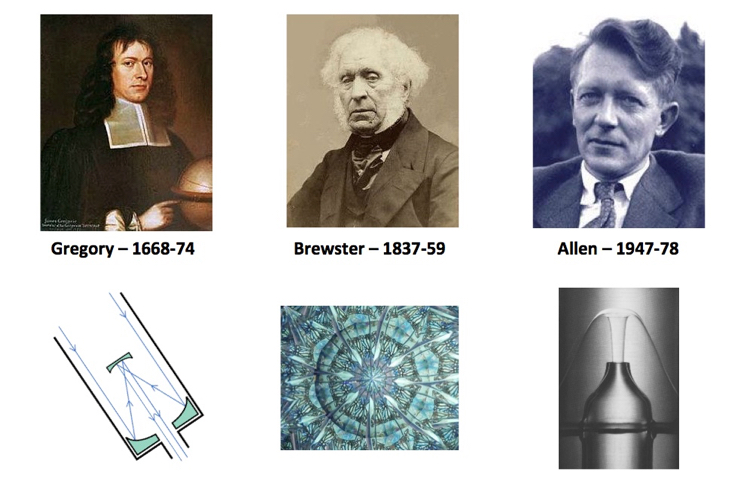 Jack Allen was a pioneer of low-temperature physics, best known for his research on liquid helium, including the discovery of the superfluid fountain effect. He was also influential within the University and was largely responsible for the expansion of the Faculty of Science in the 1960s and its move to the North Haugh. Prior to that time, the physics research labs were located on the Scores in Edgecliffe house where one of the UK's first lasers was built in a Victorian bedroom, and liquid hydrogen and helium were made and studied in the shed at the back.

Around this time, Finlay-Freundlich led the design and construction of the James Gregory telescope, which was eventually to see first light in 1962. The JGT is a 37″ Schmidt-Cassegrain, and remains today the largest operating optical telescope in the UK.

The technologies that grew from these modest beginnings now underpin today's world-leading physics and astronomy research in St Andrews. Helium, now liquefied in-house on an industrial scale, cools the superconducting magnets used to study designer quantum materials. Advanced lasers track the movement of electrons through a solar cell with a trillionth of a second precision, and image and manipulate individual biological cells for medical diagnosis and treatment.

The physics department moved into its current location in 1965; the building is now named after J.F. Allen. Today's laboratories include advanced cleanrooms for semiconductor processing, high-precision crystal growth facilities, and ultra-low vibration laboratories that house specialised microscopes that can see the individual atoms on the surface of a solid. A trio of robotic 1-m telescopes, part of the Las Cumbres Observatory Global Network, now give the observatory a global footprint to look deep into the centres of galaxies and to discover new worlds orbiting distant stars.