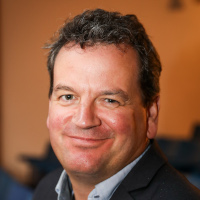 Michael Downes became the University's first full-time Director of Music in 2008, having previously held a similar post at Fitzwilliam College, Cambridge. He read English and Music at King's College, Cambridge, and completed a doctorate on Debussy at the University of Sussex. He studied the cello with teachers including Ioan Davies and Timothy Mason and conducted with teachers including Lionel Friend and Colin Metters. Before moving to Scotland, he conducted numerous choral, operatic, orchestral and contemporary music groups in London and the South-East.

For the Music Centre, he conducts the St Andrews Chamber Orchestra, which brings together the best players from the University community: recent performances have included Beethoven's final three symphonies and the world premiere of Sally Beamish's North Sea Edge, commissioned to mark the University's 600th anniversary. In 2009 he founded Byre Opera, which he has subsequently conducted in annual productions including Britten's Rape of Lucretia and Albert Herring, Tchaikovsky's Eugene Onegin and Handel's Acis and Galatea. He also conducts the town-gown St Andrews Chorus, now the largest choral society in Scotland with over 175 singers. He was one of the founding artistic directors, with Sonia Stevenson, of St Andrews Voices, a new festival of vocal music which was launched in October 2012.

Michael has lectured on opera and music for bodies, including:

He regularly reviews books on music and opera for the Times Literary Supplement and writes programme notes for organisations including the CBSO and Aldeburgh Music; he has written a well-received book for Ashgate about the music of contemporary composer Jonathan Harvey, and has collaborated on books with Harvey and with Nike Wagner, great-granddaughter of Richard.

In August 2014, following the University’s lease of the Byre Theatre from Fife Council, Michael was appointed for three years as the theatre’s Artistic Director, with the brief of bringing together a diverse programme of professional, student and community performances.