I am the translator of Eva Meijer's novel Bird Cottage, first published in the Netherlands in 2016 as Het vogelhuis.

Bird Cottage tells the fictionalized story of Len Howard, a musician and ornithologist who after a successful career in a London orchestra devoted her life to the study of birds. Len Howard was born in 1894, the daughter of a well-off middle class family. The expectation in that period was that she would eventually marry someone from her own class and have a family.

Instead Len – Gwendolen – left her home in Wales and made a life for herself in London. In the late 1930s she gave up her musical career and bought a cottage in Ditchling, Sussex, where she literally began to live with birds. She left the windows open so the birds could fly in and out as they pleased, even roosting in the house at night. Her studies of wild birds were well ahead of her time and led to the publication of several articles and two bestselling books, yet the scientific establishment did not take her work seriously. Was this because she was a woman, or because of her conviction that birds could not be studied under laboratory conditions?

Her belief that the researcher should study the behaviour of birds within their own natural environment was ahead of her time, but is now shared with many ethologists. From the bare bones of this true story, Meijer has created a wonderful novel that follows Howard’s life from her earliest years through to her death. In Meijer’s story Len becomes a strong-willed, living, breathing character whose sensitivity to music and nature are explored and developed with miraculous insight and élan. The novel has an interesting structure, interweaving short chapters that follow the lives of the birds that Len befriends with the story of Len’s own life.

The short chapters have a popular scientific style, modelled on Howard’s own voice in her published works, and they particularly concentrate on one of Len’s favourite birds, a Great Tit called Star. All the birds are given names and Len is well able to distinguish them as individuals; indeed her argument was that birds have individual intelligence and that not all their behaviour is instinctive. The longer chapters portray Len’s inner world, her relationship with the world around her and with her family and friends.

Len lives through all the most important events and movements of the early and middle 20th century, and is affected by them, particularly by the Suffragette movement and the two World Wars, but it is her intense connection to the natural world that ultimately defines her life. In creating a novel that explores how Len might have lived and thought, what her driving forces were, Meijer ask her readers to how imagine we can build genuine friendships and relationships with non-human animals, whilst still, as Len did, respecting their autonomy and leaving them free.

I felt it was a real privilege to be commissioned to translate this work. 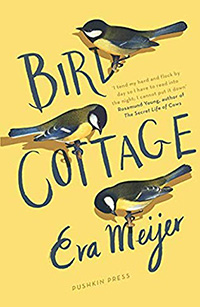