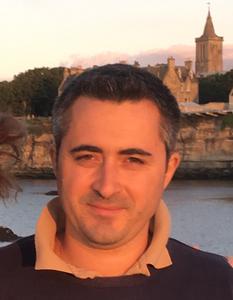 I came to St Andrews in 2016 after research fellowships at Magdalen College Oxford and the Institute for Advanced Study in Princeton. I hold a BA and an MA in Classics from the Scuola Normale Superiore in Pisa (2006, 2008), and a D.Phil. from the University of Oxford (2012). Between 2010 and 2013 I worked as an assistant editor for the Oxford Dictionary of Medieval Latin.

My main project is an edition of and commentary on Terence's Heauton Timorumenos, which I am preparing for the Cambridge 'Orange Series', thanks to the support of a Loeb Classical Library Foundation Fellowship and a British Academy Mid-Career Research Fellowship.

The commentary aims to develop a new interpretation of Terence, focusing on his key role in the integration of Greek culture and the creation of a literature for the rising power of Rome. These are research areas in which I am particularly interested, and which I am also investigating through a project on the special relationship between Pergamene Culture and Rome (with Thomas Nelson and Stefano Rebeggiani), and a commentary of Lucretius DRN 4 (under contract with Lorenzo Valla).

I have a strong expertise in the history and variation of Latin, both as the language of Rome, written and spoken, and as the lingua franca of Europe until the 16th century, and beyond. This developed in particular during the preparation of my first book (Oxford 2015), focusing on the verb 'to be' in Latin, and also through work for the Oxford Dictionary of Medieval Latin from British Sources, and translations of medieval andRenaissance texts. I'm currently nurturing this expertise with an edited volume on Early Latin language (with James Adams and Anna Chahoud, forthcoming with CUP).

I am also very interested in (ancient) philosophy of language and theory of fiction. The first interest led to a chapter on Caesar's linguistic 'ideology', and a volume, co-edited with Barney Taylor, focusing on the key question about the relation between language and reality (Cambridge 2019). The second interest developed with chapters and articles on ancient theory of (Roman) comedy, and realism in particular.

These interests extend well beyond the ancient world, and have converged into a series of works on modern literature, including essays on Oscar Wilde’s Happy Prince and John Henry Newman’s Callista, and above all articles on Tolkien's works and poetics, stemming from a collaboration with the Institute for Theology, Imagination and the Arts at the University of St Andrews (ITIA).