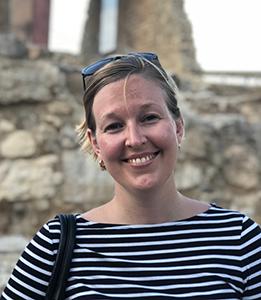 I graduated from UCL in 2010 with a degree in Archaeology, Classics, and Classical Art before moving to the University of Oxford for an MSt in Classical Archaeology (2011). I also completed an MA in Classics (UCL, 2012), before returning to St Hugh?s College, Oxford, for my DPhil in Classical Languages and Literature (2018).

My research focuses on the relationship between image and text in the classical world and beyond, with a strong emphasis on the visuality of Imperial and late-antique epic poetry. I am particularly interested in exploring the ways in which visual influences affect literary narrative, be it through the writer?s engagement with visual culture or their use of visual language. Such a visual approach to text enables us to understand better the dynamic interactions between visual and textual media, and to recognise the misguidedness of viewing images as dependent on texts, or as mere illustrations of literary accounts.

Throughout my work on Imperial and late-antique poetry, I have been addressing the question of whether later Greek authors were familiar and engaged with the Latin classics. I am particularly interested in exploring the ways in which later Greek epic poets, such as Nonnus, Quintus, and Colluthus, developed further visual approaches to classical myth first evident in the Latin works of Ovid in particular.

I am preparing a monograph based on my doctoral research on the transmission and reception of Ariadne?s abandonment in literature and the visual arts from Homer to Boccaccio.

I am also working on a new research project on the reception of classical myth in Christian culture, focusing on Late Antiquity and the Middle Ages / Renaissance. I am particularly interested in the distinct ways these narratives are re-interpreted, re-shaped, and re-invented to contrast with, or reinforce, Christian ideas of morality.