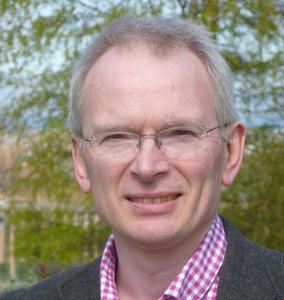 Prof Paul Wright gained a PhD (Supervised by Prof. Sir John Meurig Thomas) at Cambridge in 1986. He then worked for Shell R&D in the Netherlands until 1990. In 1991 he rejoined Prof. Thomas as a post-doc and then Assistant Director at the Davy-Faraday Laboratory at the Royal Institution of Great Britain in London for 3 years before taking a position on the Staff at St Andrews in 1994. He was promoted to Reader in 2000 and Professor in 2010. He was awarded the RSC/SCI Barrer Prize in 1999 and the ICI Readership in 2002-2004. He has served as Chairman of the British Zeolite Association and Secretary and then Vice President of the International Zeolite Association. His research encompasses the synthesis of novel microporous solids and the application of microporous solids in adsorption and catalysis. In 2008 he published the RSC monograph : Microporous Framework Solids.

Paul is the Head of Physical Chemistry Teaching at St Andrews. He contributes to the teaching of Thermodynamics and Kinetics in sub-Honours courses CH1401 and CH2701, and to the teaching of Ligand Binding in CH3716. He demonstrates in the Third Year Physical Lab CH3721, having introduced new experiments to this course. In the 5th year, he gives a Masters course in Heterogeneous Catalysis, where he covers recent advances in his research field as well as giving an advanced overview of the subject. Additionally he tutors Physical Chemistry at all levels and regularly acts as an academic monitor for placement students in CH4441.

The research group investigates all aspects of nanoporous solids, including synthesis, structure determination and applications of zeolites and metal organic frameworks. In particular, our research areas include

The catalytic performance of microporous aluminosilicate zeolites and their aluminophosphate analogues depends on their framework structure and the geometry and dimensions of their pore shape, so that the synthesis of novel structure types  gives rise to new catalysts. The use of organic molecules as structure directing agents (SDAs) is an important route to new materials, which we have exploited to generate the ‘STA’ family of zeolites, including structures with small to large pores (4 to 8Å). This work has involved the use of macrocycles and metal amine complexes as templates and the application of the co-templating approach (2 SDAs) in the synthesis of the SAPOs STA-7, -14, -18, -19 and -20, the last three via a retrosynthetic approach making use of molecular modelling to design templates.

Metal Organic Frameworks (MOFs) are a fast-growing and structurally- and chemically-diverse family of materials which possess exciting potential in a whole range of applications. They are built from metal cations linked in two or three dimensions by organic molecules (most typically carboxylates and amines) with two or more binding groups. We have synthesised novel MOFs with unique properties following three new approaches: using scandium and zirconium as the framework forming metals; using bisphosphonates as the linker molecules; via the use of combinations of linkers.

3. Carbon Capture on Zeolites and MOFs

The selective adsorption of carbon dioxide is of great importance in natural gas upgrading and is the first step in carbon capture from pre- and post-combustion gas streams in power plants and refineries. In collaboration with the Chemical Engineering Department at Edinburgh University, we are investigating a range of porous solid adsorbents for these applications, and highlights include good selectivity and uptake over the phosphonate MOF STA-12 and most recently a deep understanding of the action of ‘sentinel’ cations in zeolite Rho to give adsorbents with high capacity and CO2/N2 and CO2/CH4 selectivity. This selective adsorption over zeolites via cation gating, first described in our JACS 2012 paper, has been extended to a range of novel, supercomplex, zeolites of the RHO family, documented for example in our 2015 Nature paper. More recently, we have investigated mixed cation forms of Rho and other adaptable zeolites for superselective adsorptions and, in a European project, have investigated the properties of mixed matrix membranes comprising polymers and MOFs for CO2 separation.

Many of the novel materials we prepare have catalytically active cations of groups distributed evenly over their internal surfaces, and so have potential as shape selective single site heterogeneous catalysts. In collaboration with industrial support and other academic research groups, at St Andrews and elsewhere, we investigate the catalytic performance of our novel solids. Examples of our zeolitic catalysts include the selective conversion of methanol to light olefins over SAPOs STA-7 and STA-14, and the use of Cu SAPOs STA-7 and SAPO-34 prepared by direct synthesis using copper amine complexes as SDAs in the selective catalytic reduction of NOx with NH3. We are also investigating the catalytic applications of MOFs, and  reported the use of cobalt phosphonates in selective oxidation and of scandium MIL-100 as the most active MOF in Lewis acid catalysed C-C and C-N bond-forming reactions. Most recently, we have prepared novel Lewis acidic MOFs and combined them with either metal nanoparticles or tethered metal phosphine complexes to generate novel catalysts for tandem reactions.

5. Multitechnique approach to Structure Determination and in situ Characterisation

Much of our research makes use of state-of-the-art structural methods to characterise the new materials' structure. Where single crystals are unavailable, powder diffraction analysis combined with electron microscopy, computer modelling and solid state NMR can determine structure and dynamics . We typically use synchrotron-based diffraction studies to study the structural response to catalyst activation and gas adsorption (for example for carbon capture on zeolites and MOFs).

Additionally, we have, together with Russell Howe of Aberdeen, pioneered the use of synchrotron radiation IR to follow catalytic reactions in single crystals with unprecedented temporal resolution, and observed the formation of the first C-C bonds in the MTH reaction over ZSM-5.