A new mechanical 'clock' has been created by an international team of researchers, led by Dr Yoshi Arita and Professor Kishan Dholakia, which could test the fundamental physics of gravity.

The levitated mechanical oscillator, created within a glass sphere the size of a single blood cell, was manipulated by light by the team to create an ultra-sensitive sensor which could measure temperature and pressure changes at the nanoscale.
This highly accurate clock could potentially detect gravity at smaller scales than previously possible and find potential evidence for deviations from Newton?s laws of gravity calling for new physics beyond what we currently understand.

The research, supported by the UK Engineering and Physical Sciences Research Council and the Czech Science Foundation, is published in Science Advances.

Resonance is a phenomenon that is all around us: it occurs when one object vibrates or 'oscillates' at the same natural rate as an adjacent second object, this forces that second object to vibrate itself, often showing large motion.
In physics this can be used to great effect with resonators that are the size of cells or even atoms. They undergo periodic motion, akin to a ticking clock, and can drive one another. This leads to ways to make measurements at unprecedented accuracy.

For example, periodic internal jumps in energy (vibrations) in atoms may be linked to external timepieces: these are at the heart of making Global Positioning Systems (GPS) for ultra-precision time keeping. How long this periodic motion can be maintained is determined by the 'Q' value. A resonator with a high Q factor rings or vibrates for longer enabling more accurate measurements. 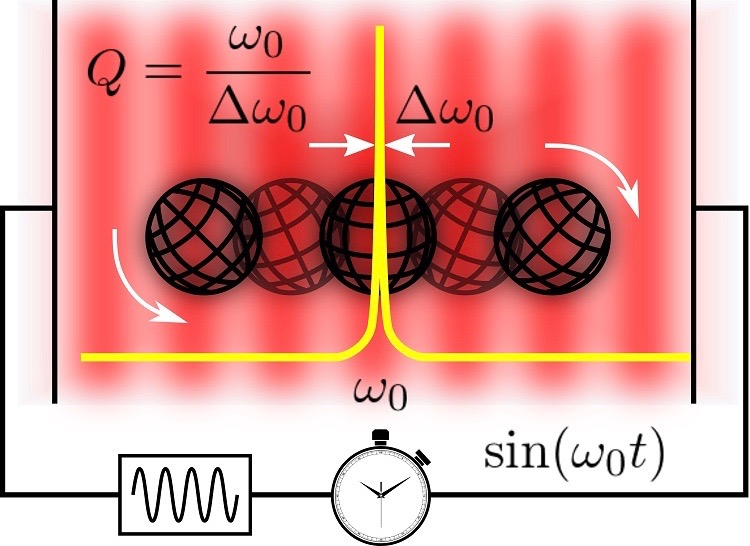 A calcium carbonate micro-sphere, the size of a cell, and levitated by light, acted as an ultra-stable oscillator ('clock'). The micro-oscillator performed very precise, stable motion in the study. Credit: Yoshi Arita (University of St Andrews and Chiba University)

Now Dr Yoshi Arita and Professor Kishan Dholakia from the University of St Andrews in Scotland, with connections to Chiba University in Japan (YA, KD) and Yonsei University in Korea (KD), and Dr Stephen Simpson and Dr Pavel Zemánek from the Institute of Scientific Instruments of the Czech Academy of Sciences in the Czech Republic, have seen ultra-precise periodic motion in a minuscule glass sphere, the size of a blood cell, held in vacuum by light.

Performing the study in vacuum helped avoid friction which would damp the motion - and reduce the Q value. The team manipulated the light to cause the tiny sphere to move both back and forth and spin in perfect harmony, creating a very well-defined 'clock'.

The motion of the sphere reached a Q value of more than 100 million, over 100-fold higher than previous reported results for such systems. This motion is very sensitive to any external influence and the team aims to use it to pick up minuscule environmental disturbances, such as changes in temperature and pressure, and even test fundamental physics.

Issued by the University of St Andrews Communications Office. Read the full story in the News archive.