Graham Bruce, a senior post-doctoral researcher at the School of Physics and Astronomy, won Silver at a competition in Parliament for the excellence of his physics research, walking away with a £1,250 prize. Graham presented his research to dozens of politicians and a panel of expert judges as part of the poster competition STEM for BRITAIN on Monday 9 March 2020. His research involves developing new techniques and technology to measure the wavelength (or colour) of lasers.

Since their invention 60 years ago, lasers have revolutionised the way we measure the world. For example, they allow us to measure the precise chemical composition of unknown substances, and keep track of time to the incredible accuracies needed to allow GPS satellite navigation to work. Importantly, in all these applications we need an accurate way to measure the properties of the laser itself, which is in fact not as simple as it sounds. 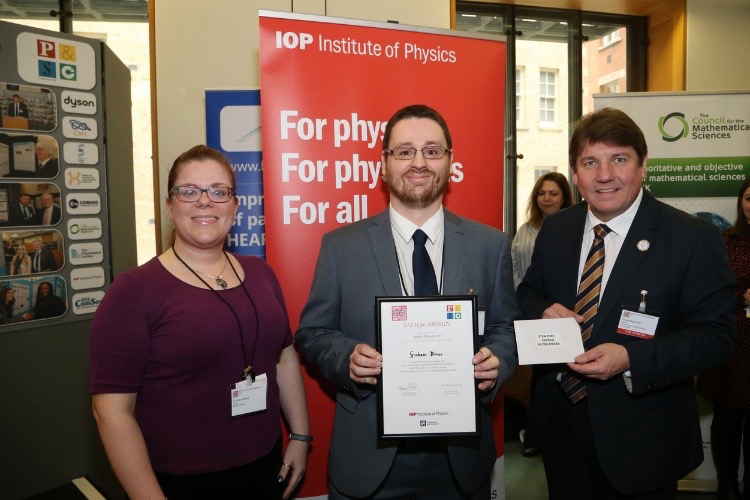 Graham (middle) was presented his award by Dr Tamara Clelford of the Institute of Physics and Stephen Metcalfe MP, Chair of the Parliamentary and Scientific Committee. (Photo copyright John Deehan Photography Ltd)

In recent work, Graham and his colleagues in the Optical Manipulation Group in the School of Physics and Astronomy have pioneered a new approach to measure laser wavelength with remarkable precision. Their approach starts with a surprising step: to measure a laser beam precisely, they first convert the beam into the biggest mess possible by shining the laser light at a rough surface, which could be something as simple as Sellotape or white paint, to scatter the light. This creates a grainy pattern through the process of interference of the scattered light, known as speckle. This pattern is most familiar as the white noise which used to be seen on analogue televisions in bad weather and is usually seen as an obstacle to any laser-based application as it seems random and uncontrolled. However, the pattern itself is very rich in information. 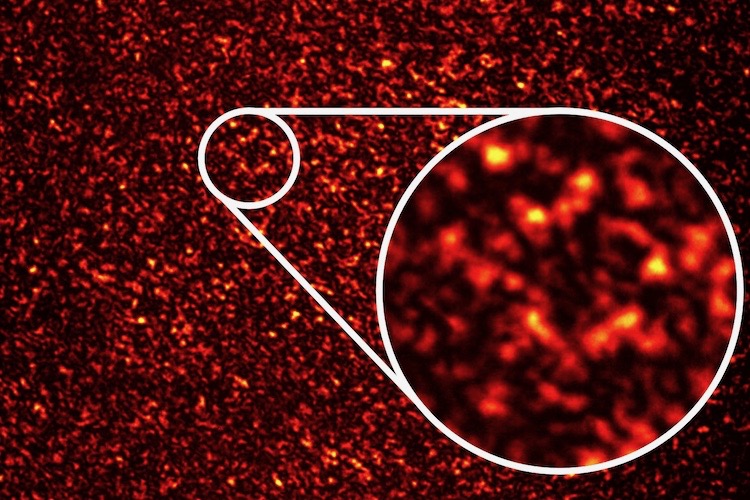 A speckle pattern which is used in the new wavemeter.

The exact speckle pattern produced is very sensitive to changes in the properties of the light, such as wavelength. Powerful numerical techniques can then be used to extract the wavelength from an individual speckle pattern. The St Andrews wavemeter can measure the wavelength of individual laser beams to attometre precision. For context, this is equivalent to measuring the distance around the Earth's equator to an accuracy of the thickness of a human hair. The accuracy is a thousand-fold improvement on state-of-the-art commercial wavelength meters and can be realised in a robust, compact and low-cost device.

The team have also shown that their approach can independently measure the wavelength of multiple lasers simultaneously. These advances promise a step change for the information-carrying capacity of optical fibres in chemical sensing and in the development of portable quantum technologies.

Graham was judged against 23 other shortlisted physicists in a competition that also includes categories for researchers who are chemists, biologists, engineers and mathematicians, and is the only one of its kind, taking place in Parliament itself. There are only three winners in each category though, and Graham's Silver medal is a fantastic achievement.

Graham said, "Our team in St Andrews has been very excited by the developments of this technology. It is great to be able to share the surprising precision that can be achieved by making a mess of the light with other researchers and with policymakers. Of course I am delighted to have won Silver. The event itself was a great experience, allowing me to network with other researchers across the sciences and the visiting politicians."

STEM for BRITAIN aims to help politicians understand more about the UK's thriving science and engineering base and rewards some of the strongest scientific and engineering research being undertaken in the UK.