Fighting TB with light and sound

A UK-wide research team, led by the Schools of Physics and Astronomy and Medicine at University of St Andrews, have developed an innovative way to monitor the reaction of living bacteria to antibiotics using lasers and sound.

This new approach could lead to a more detailed understanding of antimicrobial resistance and shortening the treatment for the world's leading infectious disease, Tuberculosis (TB) which causes about a million deaths every year.

The study, in collaboration with the University of Southampton, published 14 May 2020 in Communications Biology (Nature), opens the door to studying the response of any microorganism to various antivirals and antibiotics. 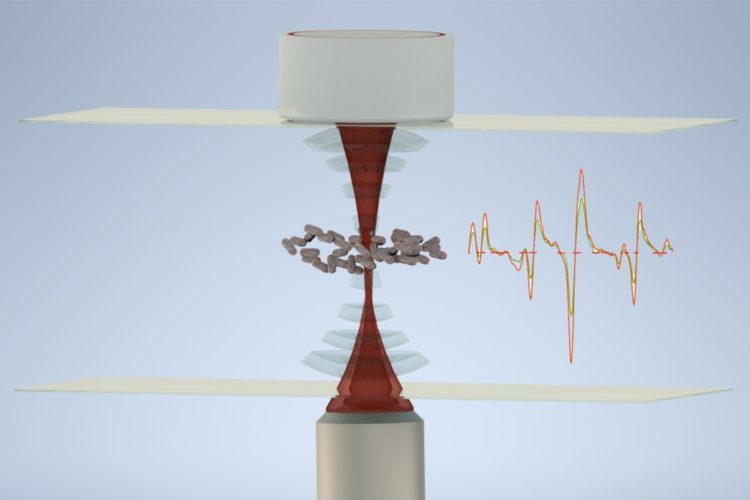 Picture caption: Living bacteria are confined by the force of sound in the centre of a small chamber only a 1/10 of a millimetre wide. The surrounding liquid can be changed at will. Light scattering gives a Raman signal (a chemical fingerprints) from the bacteria which are seen in the inset box. This data allows scientists to monitor key changes in the bacteria over a long period.

Studying bacteria is major societal challenge given it is at the heart of tackling worldwide diseases.

Bacteria can be grown in the laboratory and tested on new antibiotics, but these methods are limited. Ideally, researchers want to isolate bacteria from external influences and observe their response in a non-invasive way. To address this, the St Andrews-led team developed a new device that harnesses the power of both light and sound.

Light and sound are waves. They carry momentum and are able to exert a force, but the force of sound waves is much stronger than that of light so is more appropriate to confine bacteria. Conversely, light is perfect for analysis of the world around us. This is because light can interact with the internal structure of atoms and molecules, including those of the bacteria.

The team used sound waves to levitate and immobilise living bacteria in a small chamber. Then by scattering light from the bacteria they recorded a Raman signal: this is an optical fingerprint that reveals the molecular composition of the bacteria.

This ingenious combination of sound and light allowed the team, for the first time, to measure real time changes of the bacteria to existing antibiotics used for TB.

The potential applications of the approach will lead to a better understanding of infectious disease and antimicrobial resistance.

Dr. Mingzhou Chen, a senior research fellow from the Optical Manipulation Group at School of Physics and Astronomy, said: "This is a first study to tackle the problem of studying infectious disease with lasers and sound. We hope researchers will be able to use this innovative way to look at living bacteria and beyond."

Professor Dholakia, also from the University of St Andrews School of Physics and Astronomy, said: "Given the current worldwide focus on the societal challenge of infection, we are delighted that our team from St Andrews and Southampton has been able to contribute to this topic with this technological breakthrough."

Professor Stephen Gillespie and leader of the infection group at the University of St Andrews School of Medicine said: "This new tool will help us to understand why TB treatment takes so long and could be a platform for testing new drugs."

The work was supported by the UK Engineering and Physical Sciences Research Council, the PreDiCT-TB consortium and the PanACEA consortium.