A unique six-planet system, 200 light years away from Earth, has been observed around the star TOI-178 by an international research team including Dr Tom Wilson from the University of St Andrews.

The observations were made using the CHEOPS (Characterising ExOPlanets Satellite) space telescope that was launched in December 2019 with the important goal of precisely measuring the size of known planets. However, as this work finds, the spacecraft has the exciting potential to discover new planets.

The team had believed there were only three planets orbiting the star TOI-178, but subsequently found another three, with five out of the six in a harmonic rhythm.

Dr Thomas Wilson, co-author of the paper and Research Fellow in the Centre for Exoplanet Science in the School of Physics and Astronomy at the University of St Andrews, said: "When we started studying this planetary system we thought that there were three planets orbiting TOI-178 based on observations with NASA's Transiting Exoplanet Survey Satellite (TESS), but we were unsure what we would find with closer inspection using CHEOPS. With 11 days of high-quality data it quickly became apparent that there were at least five planets in a special resonance chain of orbits." 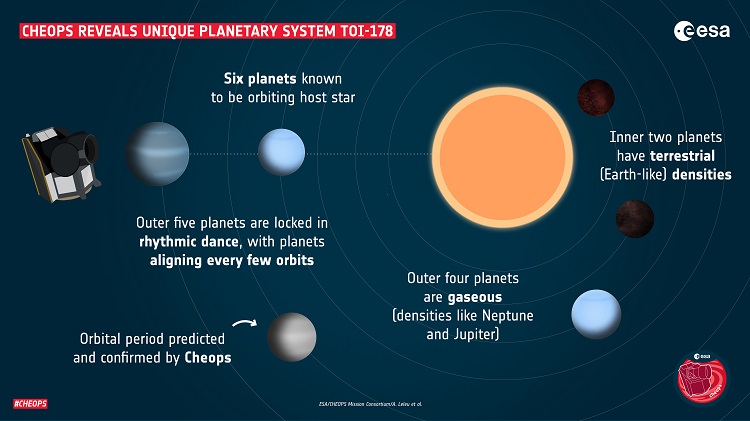 A planetary system can form a resonance – a kind of harmony when planets, whose orbital period ratios form simple fractions, regularly attract each other with their gravity when one planet takes three days to orbit its star and its neighbour takes two days, for example.

"This rare configuration prompted us to search for another planet to complete the chain, and with additional data we were able to confirm the presence of a sixth planet with the orbital period we predicted," added Dr Wilson.

Professor Andrew Collier Cameron, Professor of Astronomy in the Centre for Exoplanet Science in the School of Physics and Astronomy at the University of St Andrews, who leads the mission's data-analysis team, said: "The chain of resonances between the planets in the TOI-178 system is a remarkable fossil clue to the entire system's formation process. This orderliness has allowed these closely-packed planets to avoid catastrophic interactions with each other for billions of years."

Moreover, the research published in Astronomy and Astrophysics found the planets to be in a unique planetary system configuration which challenges current understanding of planet formation and evolution.

Before now, closely-packed planets orbiting a star in such a unique, resonance manner decrease in density the further away they are from the star. However, in this case the density of the planets around TOI-178 appears to be a wild mixture despite the harmonic, orderly way they orbit around their star, as confirmed using data from ESPRESSO on the Very Large Telescope (VLT) at the European Southern Observatory's (ESO)'s Paranal Observatory in Chile.

ESA Project Scientist Kate Isaak said: "It is the first time we have observed something like this. In the few systems we know with such a harmony, the density of planets steadily decreases as we move away from the star. In the TOI-178 system, a dense, terrestrial planet like Earth appears to be right next to a very fluffy planet with half the density of Neptune followed by one very similar to Neptune."

Combining the fragile nature of the orbits of these closely-packed planets with the unprecedented mixture of planet densities, means that the TOI-178 system raises many questions.

Dr Adrien Leleu, the astrophysicist from the University of Geneva who led the team, said: "The system therefore turned out to be one that challenges our understanding of the formation and evolution of planetary systems."

Issued by the University of St Andrews Communications Office.