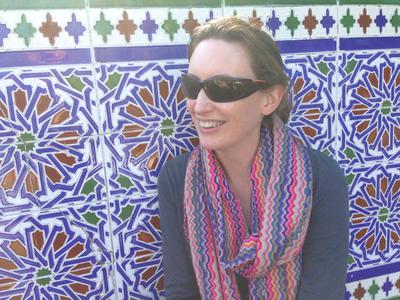 Professor O'Leary studied International Marketing and Languages at Dublin City University before going on to complete a PhD in Spanish literature at University College Dublin. She lectured at the National University of Ireland, Maynooth from 2000 until moving to St Andrews in 2013. Since her arrival at St Andrews, she served as Head of the Department of Spanish (2014-17) and Associate Dean of Arts (2017-18).

Professor O'Leary teaches on several undergraduate and postgraduate modules in Spanish and the School of Modern Languages.

Her Honours options include:

Professor O'Leary has published widely on contemporary Spanish theatre and her works include a monographical study of the theatre of Antonio Buero Vallejo (Tamesis, 2005) and articles on Fernando Arrabal (JILAR, 2008), Antonio Buero Vallejo (Bulletin of Spanish Studies, 2011), Carlota O’Neill (Bulletin of Spanish Studies, 2012) and the Nosotros Theatre Group (MLR, 2017). Other publications include A Companion to Carmen Martín Gaite (with Alison Ribeiro de Menezes; Tamesis, 2008; pb 2014), Legacies of War and Dictatorship in Contemporary Spain and Portugal (co-edited with Alison Ribeiro de Menezes, Peter Lang, 2011), and Global Insights on Theatre Censorship (co-edited with Diego Santos Sánchez and Michael Thompson, Routledge, 2015). The latter is one of the outputs of the AHRC-funded project Theatre Censorship in Spain: 1931-1985 (http://www.dur.ac.uk/mlac/tcs/). Her work on translation includes an article on Alfonso Sastre’s versions of Sean O’Casey’s work (Translation Studies, 2018) and one on translations of Jean-Paul Sartre's theatre in Spain (Perspectives, 2020). Current research projects include the preparation of a book on theatre censorship during the Spanish Civil War for the Spanish research group, Métodos de propaganda activa en la Guerra Civil, and work on Spanish Civil War exiles in Latin America.