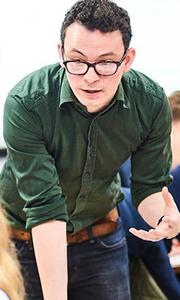 I started in St Andrews in 2017 as Lecturer in German, having previously taught at Newcastle University, University College London, and Worcester College and Lady Margaret Hall, Oxford. My research interests are:

I am happy to discuss supervision of doctoral work on any of these areas.

My current project explores experiences of marginalisation in Germany?s techno scene, with a specific focus on emotions. I am working with a range of sources, from techno music, photography and club promotional material to magazines, literature and film. The first stage of the project has been funded by a Research Incentive Grant from the Carnegie Trust, and is entitled Afrogermanic? Cultural Exchange and Racial Difference in the Aesthetic Products of the Early Techno Scenes in Detroit and Berlin. I was selected as one of the AHRC/BBC New Generation Thinkers in 2019. I presented some of my work on BBC Radio 3?s Free Thinking ? listen here to my ?postcard? from the queue at one of Berlin?s most famous clubs.

With Nicola Thomas (QMUL), Rey Conquer (Oxford) and Richard McClelland (Bristol), I?ve been developing an online resource called Expanding the German Studies Curriculum. It features a bibliography of texts and films, and a blog. Please get in touch if you?d like to contribute!

My book, Comrades in Arms: Military Masculinities in East German Culture, appeared in February 2020 with Berghahn Books, and is available to download as an open-access e-book. I presented some of my ideas from the book as an Essay on BBC Radio 3 ? listen to it on BBC web site.