« back to Art, Culture, Sport, Lifestyle

Health, Hedonism and Hypochondria: The Hidden History of Spas

Published by Bloomsbury (Tauris Parke imprint) on August 20, Health, Hedonism and Hypochondria: The Hidden History of Spas represents the culmination of a lifelong interest in Europe's historic spas on the part of Ian Bradley, Emeritus Professor Cultural and Spiritual History at St Andrews University.

Based on research undertaken over 40 years, it delves into the hidden history of the leading watering places of Britain and Continental Europe, including such well-known resorts as the original Spa in Belgium; Bath, Buxton & Harrogate in Britain; Baden-Baden & Bad Ems in Germany; Vichy & Aix-les-Bains in France; Bad Ragaz in Switzerland; Bad Ischl & Baden bei Wien in Austria; and Karlovy Vary & Mariánské Lázně in the Czech Republic.

Spas have been a central feature of European culture since classical times when the ancient Greeks and Romans discovered the benefits and pleasures of bathing in thermal mineral waters. Health, Hedonism and Hypochondria looks below the surface to reveal their hidden history and shadow side. Sybaritic sanctuaries of relaxation and resorts of royalty, they were also the haunts of melancholics, hypochondriacs and those seeking after escape and excitement. 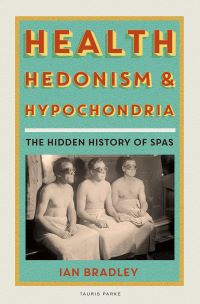