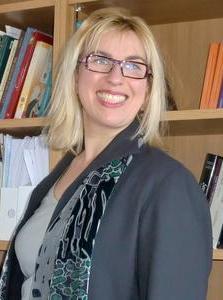 Kathryn Rudy (Kate) earned her Ph.D. from Columbia University in Art History, and a Licentiate in Mediaeval Studies from the University of Toronto. Before coming to St. Andrews, she held research, teaching, and curatorial positions in the US, the UK, Canada, The Netherlands, and Belgium. Her research concentrates on the reception and original function of manuscripts, especially those manufactured in the Low Countries, and she has pioneered the use of the densitometer to measure the grime that original readers deposited in their books. She is currently developing ways to track and measure user response of late medieval manuscripts.

Professor Rudy is the author of six books, including Image, Knife, and Gluepot: Early Assemblage in Manuscript and Print (Open Book Publishers, 2019); Rubrics, Images and Indulgences in Late Medieval Netherlandish Manuscripts (Leiden: Brill, 2017); Piety in Pieces: How medieval readers customized their manuscripts (Open Book Publishers, 2016); and Postcards on Parchment: The Social Lives of Medieval Books(Yale University Press, 2015).  In 2017-18 she held a Paul Mellon Senior Fellowship to write a book about physical interactions with the manuscript in late Medieval England. In 2018-19 she was a fellow at the Netherlands Institute for Advanced Study in Amsterdam to complete a book about manuscript production in Delft. Through 2022, with the support of a Leverhulme Major Research Grant, she is conducting a study titled ‘Measuring medieval users’ responses to manuscripts: New technological approaches’. She has won grants from, among others, the British Academy, the Bodleian Library (Oxford), the Getty Research Institute, and the Internationales Kolleg für Kulturtechnikforschung und Medienphilosophie (IKKM) at the Bauhaus-Universität Weimar.

She is a Fellow of the Royal Society of Edinburgh, Scotland’s National Academy. In 2019 she was awarded the Sir Walter Scott Medal, the senior prize in arts, humanities and social sciences in Scotland. In April 2021 she was elected Curator of the Royal Society of Edinburgh. She was elected Fellow of the British Academy in 2022.

Medieval manuscripts and objects; pilgrimage, real and imagined; forensic approaches to objects and materials; early printing; craft, embodied knowledge, and intangible cultural heritage in Europe and Asia. On leave until 2024.