We are pleased to announce the release of the latest book by Dr Patrick O’Hare: ‘Taking Form, Making Worlds: Cartonera Publishers in Latin American’, co-authored with Lucy Bell and Alex Ungprateeb Flynn and published by the University of Texas Press. The book is available from Combined Academic Publishers with a 30% discount using the code CSCV2022.

A publishing phenomenon and artistic project, cartonera was born in the wake of Argentina’s 2001 economic crisis. Infused with a rebellious spirit, cartonera has exploded in popularity, with hundreds of publishers across Latin America and Europe making colorful, low-cost books out of cardboard salvaged from the street. Taking Form, Making Worlds is the first comprehensive study of cartonera. Drawing on interdisciplinary research conducted across Mexico, Brazil, and Argentina, the authors show how this hands-on practice has fostered a politically engaged network of writers, artists, and readers. More than a social movement, cartonera uses texts, workshops, encounters, and exhibitions to foster community and engagement through open-ended forms that are at once creative and social. For various groups including waste-pickers, Indigenous communities, rural children, and imprisoned women, cartonera provides a platform for unique stories and sparks collaborations that bring the walls of the “lettered city” tumbling down. By showcasing such diverse authors and bookmakers, cartonera publishers have encouraged varied works while making a home for an aesthetics of resistance, for experimentation, and for those living on the fringes of capitalist societies in which poverty, eccentricity, and creativity itself, are suspect.

Praise for the book

“Imagine an academic library whose books, in an act of defiance, run riot, escaping their covers and spilling out their contents far and wide. Imagine all the cardboard, lying abandoned, having been emptied of the consumer goods it once contained. And imagine the joy of all the people who could never afford the goods or enter the academy, when they discover that by stitching fugitive words with salvaged cardboard, they could give new life to both. Welcome to cartonera! In this impeccably crafted study, Lucy Bell, Alex Ungprateeb Flynn, and Patrick O’Hare show how the collective practice of cartonera not only crosses the frontier between art and literature, but also has the potential to turn the stuffy world of letters upside down.’’

—Tim Ingold, University of Aberdeen, author of Being Alive: Essays on Movement, Knowledge and Description 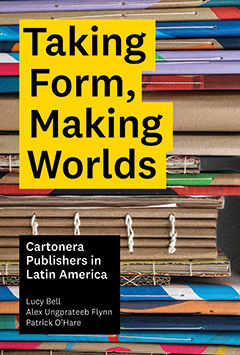