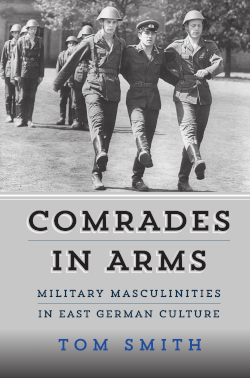 Without question, the East German National People’s Army was a profoundly masculine institution that emphasized traditional ideals of stoicism, sacrifice, and physical courage. Nonetheless, as Tom’s study demonstrates, depictions of the military in the film and literature of the GDR were far more nuanced and ambivalent. Departing from past studies that have found in such portrayals an unchanging, idealized masculinity, Comrades in Arms shows how cultural works both before and after reunification place violence, physical vulnerability, and military theatricality, as well as conscripts’ powerful emotions and desires, at the centre of soldiers’ lives and the military institution itself.

Those interested in a more digested version of the book might prefer to listen to Tom’s episode of The Essay from back in June on Radio 3.

For those with an interest in LGBTQ+ History Month, Tom also recorded an instalment of Free Thinking on BBC Radio 3 on 4 February. It’s a mostly German-themed edition, with author Daniel Kehlmann on his novel Tyll, Professor Karen Leeder (Oxford) about the anniversary of the Dresden bombings and Tom discussing how the fall of the Berlin Wall affected Germany’s queer communities. But colleagues in Arabic might also be interested in the segment of the programme by Dr Dina Rezk (Reading), also a New Generation Thinker, discussing comedy in the aftermath of the Arab Spring in Egypt.