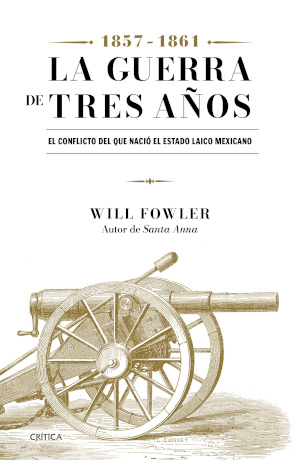 Professor Will Fowler’s new history of the Mexican 1857-61 Civil War is out this month, providing the first detailed study since 1953 of what was the most sanguinary domestic conflict Mexico experienced in the nineteenth century. Whilst the conservatives took over and remained in control of Mexico City and Puebla, controlling Guadalajara for the greater part of the war, Benito Juárez’s liberal government took refuge in the port of Veracruz. During three particularly bloody years, the major cities of central Mexico were seized by liberals and conservatives at different stages in a horrific tit-for-tat cycle of violence which saw the countryside descend into total war.

Will Fowler’s account (benefiting from a British Academy-Leverhulme Small Grant which allowed him to research both national and regional historical archives across Mexico) provides an ambitious interpretation that aims to rescue this forgotten conflict and, in so doing, nuance and revise long-held views on Mexico’s mid-nineteenth-century liberal-conservative divide.

Watch Will Fowler’s 10-minute-long interview on Fórmula TV, by journalist Eduardo Ruiz Healy, discussing his work on Santa Anna as well as his latest book on the Mexican 1857-61 Civil War, broadcast on Friday 6 March 2020 at 4pm.