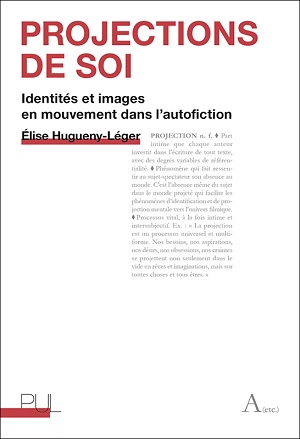 Many congratulations to Élise Hugueny-Léger from the Department of French on the publication of her monograph on French autofiction, Projections de soi: Identités et images en mouvement dans l'autofiction.

This book considers autofiction as an intermedial artistic practice. It examines an often-overlooked aspect of autofiction as it has emerged in France, namely its development through moving images – television, video, and film. The polysemic notion of ‘projection’ sheds light on various dialogues between literature and the moving image in processes of self-representation: the construction of authorial figures through media strategies; the use of cinematic language and processes of montage; film adaptations of autofictional works; subtle movements between television screens and literature.

However, while autofiction is often associated with unashamed self-display, this book argues that moving images allow for processes of disappearance, loss, estrangement, and the quest for origins to be expressed. Through in-depth case studies, Elise Hugueny-Léger argues that the dialogue between the written word and moving images enables writers and filmmakers to depict fractures and doubts which constitute the autofictional ‘I’.