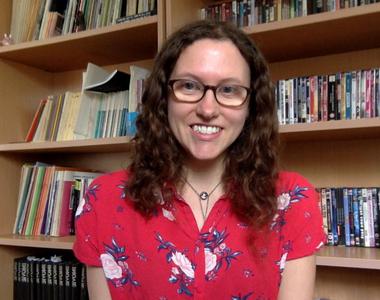 Her research focuses on the body in contemporary television as a site for articulating discourses of quality, gender and sexuality, and empathy. She is particularly interested in exploring how televisual bodies reflect and fit the features of the medium itself, and hence become a key site for working through changes in definitions of television with the rise of streaming. She is particularly interested in queer television and queer embodiment on screen, and has most recently presented this work at the Scottish Queer International Film Festival.

She is currently working on her first monograph, which focuses on kinaesthesia in television drama. This work suggests that contemporary serial television shares a focus on the body, particularly the body in motion, a focus that befits a medium concerned with the intimate, the proximate, the mobile, and the communal. Rather than reaching towards a cinematic aesthetics, television’s meaning and impact emerges from its kinaesthetics, or the way in which it uses the movement and spatial dynamics of the body for the construction of narrative meaning, emotional impact, and political engagement.