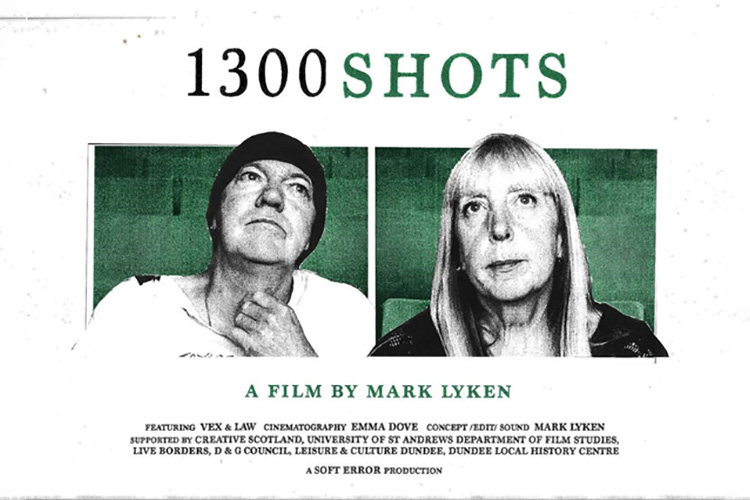 "Re-imagining Local Film Histories through Critical and Creative Practice" is a collaboration between filmmaker Mark Lyken and the Department of Film Studies to produce a film and exhibition about The Steps Theatre in Dundee during the 1990s. The project is funded by the University of St Andrews' Knowledge Exchange and Impact grant, and expands on the department's KEI work on local cinema history (Tom Rice) and on the cultivation of local film audiences (Leshu Torchin).

1300 SHOTS takes the form of a single-take portrait film that returns two ex-patrons of Dundee cinema The Steps to their favourite seats, 20 years after the cinema was decommissioned, to observe them watching one last film.

Dundee's The Steps Theatre was a critically important but largely forgotten exhibition space for arthouse and world cinemas in the 1980s and 90s. 1300 SHOTS explores a pivotal moment in the artists' own personal history as the cinema was instrumental in shaping his career as an artist and filmmaker. More broadly, the film reflects on the integral role that cinema plays in shaping community, inspiring creativity and providing access to global culture in a place experiencing high levels of unemployment and post-industrial decline. Considering these cultural shifts historically is particularly important today given the recent economic investment and development in Dundee (e.g. V&A and the flourishing Gaming industry).

The Steps closed in the late '90s and has fallen from public consciousness, but remarkably remains intact despite major regeneration in Dundee. The cultural significance of The Steps now resides within archive material and in the personal memories of previous patrons, which are foregrounded within the film.

We are delighted that the film is now being screened (worldwide) via the LUX website. There is also an artist discussion with Mark Lyken on the Thurs 24th June 7:30pm- 8:30pm that will take place over Zoom for which you can book tickets.

The collaboration with Lyken provides an innovative, creative response to local cinema history and memory. This project is part of a move to expand and develop Cinema St Andrews as a means of connecting with other local film histories across Scotland.