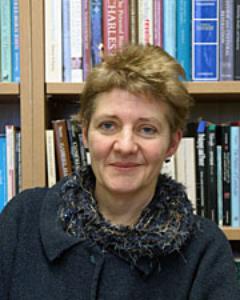 Lorna Hutson is Berry Professor of English Literature at the University of St Andrews. She received her MA and DPhil from Oxford; her doctoral research was on the Renaissance prose writer Thomas Nashe (1567-1601), and was published by Clarendon Press as Thomas Nashe in Context (1989). From 1986 to 1998, Lorna Hutson lectured at Queen Mary College, London, where she wrote her second book, The Usurer's Daughter: Male Friendship and Fictions of Women in Sixteenth-Century England (Routledge, 1994; paperback 1997). From London, she took up a Chair at the University of Hull, and then spent four years as Professor in the English Department of the University of California at Berkeley where, with Victoria Kahn, she edited Rhetoric and Law in Early Modern Europe (Yale, 2001). In 2004, she was awarded a fellowship from the John Simon Guggenheim Memorial Foundation and in 2006 an AHRC research leave grant for the purposes of writing The Invention of Suspicion: Law and Mimesis in Shakespeare and Renaissance Drama (Oxford, 2007). From 2002-05, Lorna Hutson was a discipline representative for the Renaissance Society of America. She is a member of the editorial boards of the journal Representations. She has published articles on Jonson, Shakespeare, Aemilia Lanyer, Katherine Philips, Isabella Whitney, and Renaissance prose fiction, as well as editing Feminism and Renaissance Studies (1999) for Oxford University Press. She is interested in the rhetorical bases of Renaissance fiction and drama, and particularly (at present) in the forensic or legal underpinnings of Renaissance poetic fictions. Recent work includes the delivery of the Oxford Wells Shakespeare Lectures, 2012, on ?Circumstantial Shakespeare?, the editing of Ben Jonson?s Discoveries (1641) for the Cambridge Complete Works of Ben Jonson (2012) and The Invention of Suspicion: Law and Mimesis in Shakespeare and Renaissance Drama (OUP, 2007, pbk 2011), which won the Roland Bainton Prize for Literature in 2008. She is currently working, with Bradin Cormack, on the Oxford Handbook of English Law and Literature, 1500-1700, and directs CMEMLL, the Centre for Mediaeval and Early Modern Law and Literature.