Imagining Inheritance from Chaucer to Shakespeare 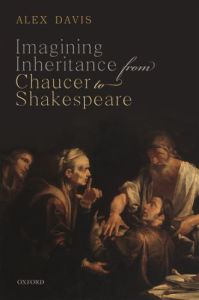 Congratulations to Dr Alex Davis on his new book published by Oxford University Press. In Imagining Inheritance from Chaucer to Shakespeare, Alex explores how inheritance was imagined between the lifetimes of Chaucer and Shakespeare. Focussing on poetry, prose, and drama, inheritance is discussed in relation to a range of themes including religion and the development of a world system of trade.

Topics range from impossible bequests of the soul; an outlawed younger son who rises to become justice of the king's forests; the artificially-preserved corpse of the heir to an empire; a medieval clerk kept awake at night by fears of falling; a seventeenth-century noblewoman who commissions copies upon copies of her genealogy; Elizabethan efforts to eradicate Irish customs of succession; to thoughts of the legacy of sin bequeathed to mankind by our first parents, Adam and Eve.

Alex argues that while inheritance dominates the 'premodern' world of medieval and Renaissance writing, it persists into a modernity that has rejected inheritance as an ideal but within which it continues as a social practice.