Feeling Faint: Affect and Consciousness in the Renaissance 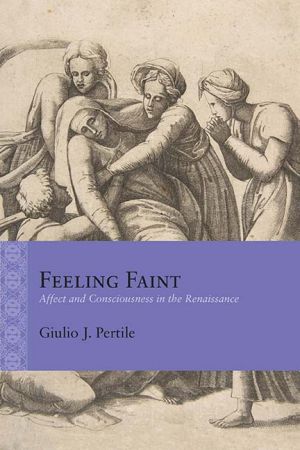 Feeling Faint is a book about human consciousness in its most basic sense: the awareness, at any given moment, that we live and feel. Such awareness, it argues, is distinct from the categories of selfhood to which it is often assimilated, and can only be uncovered at the margins of first-person experience. What would it mean to be conscious without being a first person—to be conscious in the absence of a self?

Such a phenomenon, subsequently obscured by the Enlightenment identification of consciousness and personal identity, is what we discover in scenes of swooning from the Renaissance: consciousness without self, consciousness reconceived as what Fredric Jameson calls "a registering apparatus for transformed states of being." Where the early modern period has often been seen in terms of the rise of self-aware subjectivity, Feeling Faint argues that swoons, faints, and trances allow us to conceive of Renaissance subjectivity in a different guise: as the capacity of the senses and passions to experience, regulate, and respond to their own activity without the intervention of first-person awareness.

In readings of Renaissance authors ranging from Montaigne to Shakespeare, Pertile shows how self-loss affords embodied consciousness an experience of itself in a moment of intimate vitality which precedes awareness of specific objects or thoughts—an experience with which we are all familiar, and yet which is tantalizingly difficult to pin down.