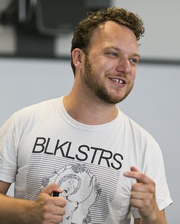 In a double triumph, Oliver Emanuel from the School of English won the Tinniswood Prize for Best Radio Drama for his play When The Pips Stop.

Audio-dramatist, playwright and screenwriter Sarah Woods presented Oliver Emanuel with the award for the best original audio drama script and a cheque for £3,000 at the BBC's Audio Drama Awards on 3 February 2019.

He also won for Best Series at the BBC for The Truth About Hawaii which was produced and directed by Kirsty Williams, for BBC Scotland and BBC Radio 4.