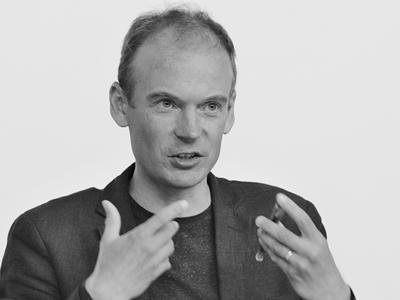 I did an undergraduate degree in English language and literature at Balliol College, Oxford. An interest in literary theory pushed me towards "continental" philosophy. After three years studying at the Graduate Faculty of the New School for Social Research in New York, I returned to Oxford to do the BPhil in Philosophy, and wrote my thesis on Kant's theory of freedom in the Critique of Pure Reason. I stayed at Oxford to work on a DPhil on the free will problem in 18th-century British philosophy, under the supervision of Galen Strawson and Ralph Walker. I was then a British Academy Postdoctoral Fellow at St. Catherine's College, Oxford.

I have taught at St. Andrews since 2004. I spent the academic year 2012-13 as a Member of the Institute for Advanced Study in Princeton. I have held research fellowships from the AHRC, the British Academy, and the Leverhulme Trust. In 2018 I gave the Benedict Lectures in the History of Political Philosophy at Brown University. I was elected a Fellow of the Royal Society of Edinburgh in 2019.

I am always glad to hear from prospective reseach students interested in working on topics in seventeenth and eighteenth-century philosophy, and on the intellectual history of the period more generally.

I teach a variety of Philosophy modules at both undergraduate and postgraduate levels, including The Enlightenment, Political Philosophy in the Age of Revolutions, Rousseau on Human Nature, Society, and Freedom, and Texts in the History of Political Philosophy. I also teach on the MLitt in Intellectual History.

My work on Hume's intellectual biography made me interested in the history of the concept of philosophy, and in the different understandings of philosophizing operative in different periods of the past. I currently hold a Senior Research Fellowship from the British Academy and the Leverhulme Trust to work on a project with the title "Philosophy, Philosophizing, and the Philosopher in 18th-Century Britain".

Teaching the political philosophy of the 17th and 18th centuries has made me re-think assumptions about the history of the problem of political obligation. I am interested especially in the after-life of Locke's engagement with the ideas of Sir Robert Filmer. I developed some preliminary thoughts about this in my Benedict Lectures, and in a 2020 article on Locke and Filmer in Locke Studies. More recently I have been working on ways in which the Locke-Filmer debate is re-staged and re-framed in eighteenth-century British political thought.

Recent political events have got me interested also in the concept of "the people" and its political uses. Hobbes's argument that the people, considered as a unified body with a single will, only exists in the will of the sovereign representative seems to me to be deeply relevant to our current situation. I am working on a paper, or maybe a book, in which I try to elucidate that argument, and then consider Pufendorf's response to it, along with Locke's apparent refusal to engage with it.