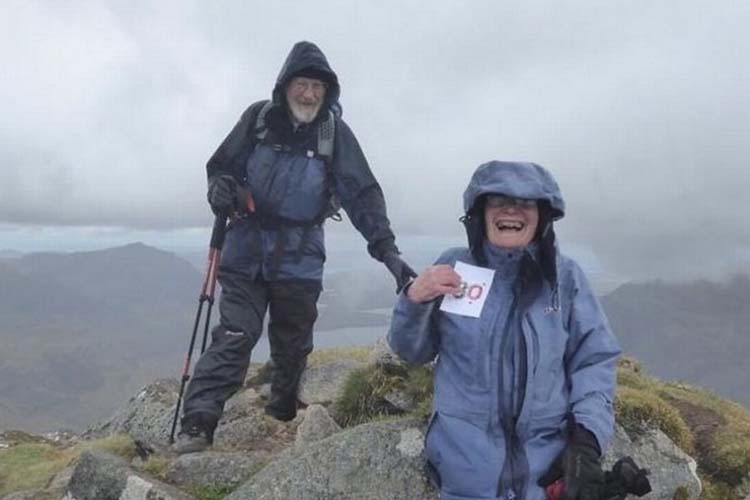 Roger and Margaret Squires atop A’Mhaighdean (967m) in Wester Ross.

Roger joined the Department of Logic and Metaphysics in 1964 having been recommended for the post by Gilbert Ryle with whom he had studied at Oxford. He had gone there in 1958 from King Edward VI Grammar School in Nuneaton, and graduated with a first in PPE in 1961. After a year at Brown University in Providence RI, he returned to Oxford for the B.Phil. where he worked with Ryle whose manner, style of philosophy and view of psychological concepts deeply influenced him. It was at Oxford that he met Margaret his wife-to-be who was then at St Hilda’s, and with whom he would have a son and a daughter.

Having secured an academic post Roger soon began to publish in leading journals, with seven articles appearing in a three-year period (1968-70) in Analysis (twice), Mind, Philosophy, Philosophical Quarterly (twice) and the Philosophical Review. The scale and quality of his work was acknowledged with early promotion to a Senior Lectureship but from the mid-1970s he mostly diverted his energy into undergraduate teaching and supervision of graduate students who much appreciated his acuity and encouragement, and several of whom including David Cockburn and Andy Hamilton proceeded into careers in philosophy. It was only in the 1990s that Roger returned to academic publishing.

His work, earlier and later, was shaped by the ordinary language philosophical movement of the 1960s, having been inducted into it at Oxford. His main concerns were to argue against any kind of Cartesianism (not just, or especially, with regard to the ontological issue of materialism vs dualism) but with respect to the idea that the mental is a private inner realm populated by images, mental words and sentences, volitions, etc). In connection with this he was also against causalism which he saw as implying a domain of mental agency prior to overt action.

His method was to analyse mental/psychological language so as to show that it did not carry any such commitments. This took the form of treating as adverbial what might appear to be objectual, thus images and mental processes were cast in terms of imagining or of acting in a certain manner where that could be explained without reintroducing mental items. Hence the following items ‘Visualising’ Mind (1968), ‘Depicting’, Philosophy (1969), ‘Silent Soliloquy’ Understanding Wittgenstein (1973). Regarding causalism, his most significant piece which was often referred to was ‘Memory Unchained’ Philosophical Review (1969) a critique of C. B. Martin and M. Deutscher ‘Remembering’, Philosophical Review (1966) which introduced the causal theory of memory. Another of his betes noires was dreaming where he followed something of the line taken by Norman Malcolm in his famous monograph Dreaming according to which purported dream reports are not records of internal mental activity occurring during sleep but a form of wakeful narrative.

Roger returned to the subject of dreams in the mid-1990s, and more recently as illness took hold and limited his capacity for hill-walking he embarked on further writing on the subject producing an essay ‘Disturbing Dreams’ that is a happy reminder of his style of insightful and witty writing. It was also the subject of an exchange between us in January 2021 when he wrote about the Oxford philosophy of his student days:

“When I told Ryle I rated Anscombe’s Intention (and Geach's Mental Acts) highly, he was quick to agree, adding, "But why are they so scornful of those with whom they engage in argument?" This may connect with your thought that Anscombe would have done better to have made common cause with some of the other stars in the Oxford philosophical skies rather than picking fights and then feuds with them. Wittgenstein was a great teacher but not necessarily a good influencer. …As far as this keen student admirer was concerned, Wittgenstein, Ryle and Austin (Anscombe, Geach, Urmson, Hare…) were making common cause, whether they thought so or not, in the development  and exciting practice of Fair Philosophy, which chastened discipline I hoped they had changed for good. Unfortunately ,…”.

Notwithstanding the causal revolution of the 1970s, and the displacement of ordinary language with philosophical theorizing of a causalist/functionalist type and the revival of neo-dualism of the Nagel, Chalmers sorts Roger remained constant to what he believed were the great substantive and methodological insights of Ryle and Wittgenstein.

Roger retired from St Andrews in 2000 and was delighted to have the opportunity to devote more time to his passion for walking and scaling the Scottish hills. He climbed all 282 Munros, 221 Corbetts, 219 Grahams, 89 Donalds, and all but five of the 1557 “Marilyns” all with Margaret, the two of them being pictured above.

"Roger had been working on and a month before he died finished a book called “Wideawakes and Night Mariners: The Philosophy of Dreaming.” A former student, Professor Andy Hamilton took over the editorial role as Roger became more ill and found him a publisher, Artemis. Other former students either visited or were in email correspondence with him which helped him hone his arguments (namely Professor David Cockburn, Claude Pehrson, Campbell Purton and Julian Crowe).

He told his GP in June that he was trying to finish a book. Roger always valued his plain speaking “How long is it going to take?” “About 3 months.” “O.K. If you’d said a year, I’d say don’t bother, just enjoy your life.”"