The University’s 600th Anniversary Campaign has now reached its £100 million target, thanks to the support of over 14,000 alumni, current students, staff and supporters.

The Campaign began in ‘quiet phase’ on 1 August 2008 and was formally and publicly launched by St Andrews alumnus HRH Prince William, Duke of Cambridge, on 25 February 2011.

Since August 2008, the Campaign has raised a total of £102 million in gifts and pledges.

More than £71.4 million has already been invested in key developments, including a purpose-built Medical and Biological Sciences building and the transformation of the former Martyrs Kirk into a postgraduate research library and reading rooms. Other monies have been directed towards the provision of scholarships and to advance teaching and research.

While this is the end of one chapter, it is also the beginning of another. We still have to meet project targets for the Scottish Oceans Institute, The Laidlaw Music Centre, the Sports Centre and MUSA and we will continue to make Scholarships a priority.

We also have exciting plans for the refurbishment of the Younger Hall, the creation of a New College on the Madras South Street site and the development of Science, Technology, Engineering and Mathematics (STEM) facilities on the North Haugh – projects that will help to consolidate our status as a world-class centre for teaching, learning and research.

Look out for further news about these developments in future editions of St Andrews in the News.

In the meantime, if you would like more information about any of our fundraising projects then please contact Caroline Wallard: 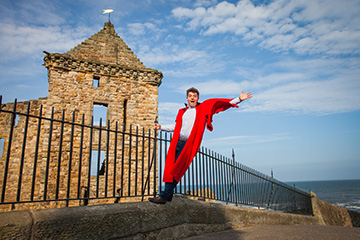