Ben Dorain: a conversation with a mountain

Duncan Ban MacIntyre’s in Praise of Ben Dorain is an eighteenth-century Gaelic poem about a West Highland mountain and its herd of red deer. Garry MacKenzie's Ben Dorain: a conversation with a mountain combines an original translation of MacIntyre’s poem, on the left of the page, with new material on the right, to form a conversation between the 250-year-old poem and the modern world.

It is available here: https://irishpages.org/product/ben-dorain-a-conversation-with-a-mountain-by-garry-mackenzie/

Kathleen Jamie writes in the Introduction to this book:

“When we may feel as though our species and our planet is cascading into a future unknown, and uncertainty is all about, it may seem odd to publish a book which is ‘a conversation’ with a mountain, the very symbol of solidity. The mountain is Ben Dorain, which rises near Bridge of Orchy. It appears as Fuji-esque cone from some angles. The conversation is also with a praise poem composed 250 years ago, by Duncan Ban MacIntyre. MacIntyre’s poem is a musical paean to this one particular Scottish mountain and its deer. The original poem is in Gaelic, a language no longer spoken on that mountainside.

But what Garry MacKenzie has done, in this wonderful book, is to revivify that poem. He has created a new ‘inhabited music’ which springs McIntyre’s work into the present day. It’s not a translation, nor a modernised version, though there is that also. He has opened MacIntyre’s mountain poem like a geode, to use a geological term, and he has created an environmentally-aware, science-informed poetic counterpoint in English, which he presents dancing along with MacIntyre’s re-expressed eighteenth-century vision. Like the deer they so admire, the two poets’ lines leap back and forth across the page, across times, across languages, across species and poetic forms. It is a new work which alerts us to the tradition, which is to say, to the consciousness of the past. It calls this consciousness into the present, so that its wisdom might strengthen us for the environmental challenges to come.

But this is not primarily a political work. This is a work of love: of landscape and animals and poetry. Despite the shifting grounds which surround it, Ben Dorain the mountain remains true and centred, its marvellous creatures marvellously observed.” 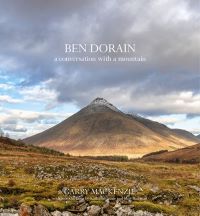