Mike Whittaker's little brother has drowned, dragging the high school senior into an abyss of grief. But when he learns what really happened at the Lawson town pool, despair turns to rage, and he brings a gun to school. Mike's near-deadly assault on a classmate has him headed for juvenile detention, and his only leverage is the truth about his brother's death -- a dark secret that threatens the most powerful family in Lawson.

A legal gambit sends Mike to a wilderness therapy program instead of prison, where he and his unlikely companions face their demons at an isolated mountain lodge under the guidance of tough-love mentors. Just two weeks in, however, a suspicious accident leaves the boys stranded and unsupervised. They soon discover a menace within their group, and what began as a struggle for redemption becomes a fight for survival deep in the Montana wilderness.

"Paul Cumbo has written a masterpiece that will grab you and hit you hard. This novel is about much more than 'wilderness therapy.' It's a great story, masterfully told." - Leonard Sax, MD, PhD, New York Times Bestselling Author of Boys Adrift

"Powerful storytelling coupled with a spot-on portrayal of the teenage psyche. Cumbo's intricate, realistic characters, and the demons with which they wrestle, invite readers into the complex and often misunderstood emotional landscape of male adolescence." - Michael Gurian, New York Times Bestselling Author of Saving Our Sons: A New Path for Raising Healthy and Resilient Boys

"At a time of growing concern about the current generation of young males, this message from the trenches is affirming and inspiring." - Michael Reichert, PhD, Author of How To Raise a Boy: The Power of Connection to Build Good Men

"Cumbo offers readers a twisty psychological drama of loss, redemption, and trust...the novel will have readers on the edges of their seats... A moving, slow-burn thriller..." - Kirkus Reviews 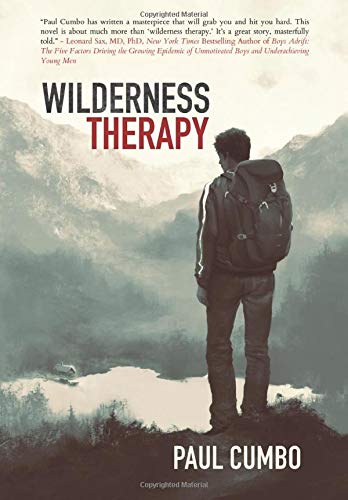