The Saul and David 'Verse

The Bible's stories of Saul and David are just that—stories. They are not merely a single narrative, but rather a universe of characters and events.

In that vein, The Saul and David 'Verse tells many stories in its 64 poems, but they are divided into three main parts: The Tragedy of King Saul tells of Saul's rise to power, his conflict with Samuel, Jonathan's exploits, David's growing fame, and Saul's descent into paranoia, as well as discoursing on the difference between gig work and full-time employment.The History of King David, Part 1 details David's transformation from outlaw to king, civil war with the remnants of Saul's family, Joab's blood-soaked rise to influence, David's construction of a godly golden age in Israel, then how he threw it all away, as well as debate on the proper response to allegations of sexual impropriety by a person in power when said person is on your side.The History of King David, Part 2 continues with the chaos of David's latter reign, Absalom's resentment and rebellion, Joab's further exploits, how further sin nearly destroyed David's people, and of course a comparison of male and female intelligence.

Ben Guthrie's first collection of poetry is by turns funny, inspiring, and tragic, and this mashup of Biblical source material with everything from the epic to the spy thriller, rendered into a variety of poetic forms, reveals new meanings in those timeless tales of Saul and David. 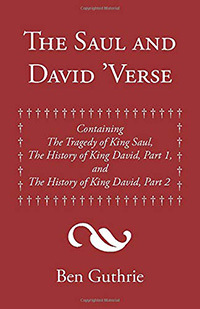