November 1914. HMS Halberd, while protecting a collier convoy, confronts a German cruiser off the English coast.

Through a gallant attack on the enemy ship, the convoy is saved, but the doughty little destroyer is outgunned and sunk. Only a few sailors survive, including Lieutenant John Braithwaite. Badly wounded and medically unfit for sea duty, he is recruited by Captain Reginald “Blinker” Hall, Director of the Naval Intelligence Division (NID).

Hall proposes to use Braithwaite for intelligence fieldwork based on his knowledge of East Africa and fluency in German. The mission – discover the secret of the mysterious cruiser SMS Aachen operating out of German East Africa, which is devastating British shipping. How is Aachen always able to find targets? How does she always evade the Royal Navy? What is the mystery ship’s secret?

Together, Braithwaite and Minstrel travel up the Zambezi River by boat to Lake Nyasa in German territory in search of the Aachen’s secret. But, they must battle the elements as well as the Germans as they go deep into Africa. Based on the actual German cruiser SMS Königsberg and the war in East Africa, the historical fiction novel Genesis of ANTIMONY launches into the thrilling world of World War I espionage, intrigue, romance, action, and adventure in the heart of the Dark Continent. 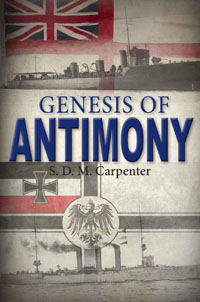