Nothing delights the British quite like the prospect of a hopeless situation.

J. Edgar Hoover sends agents to accompany Verdi, but London proposes placing Braithwaite aboard to watch over the scientist. Though rusty, the Commodore relishes the return to the field and takes his old code name ANTIMONY. Is he still up to snuff? Plagued by self-doubts and the troubling sense of a hovering malignant evil, he travels disguised as an American businessman.

An attempted kidnapping reveals a sinister future for Verdi. And where are Hoover’s missing FBI men? Alone and without reinforcement, ANTIMONY is unaware of another, far more dangerous enemy than the clumsy Abwehr agent. ANTIMONY must protect Verdi armed only with his cunning, courage, wits and keen knowledge of the game as they cross dangerous Atlantic waters.

Based on the actual incidents surrounding the final voyage of the SS. ZamZam, the historical novel Resurrection of ANTIMONY launches into the thrilling world of World War II espionage and intrigue where mission failure has high stakes for the world order and particularly, the Western democracies. 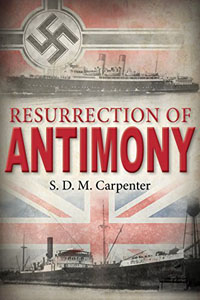