By Sword and Storm

By Sword and Storm is the eagerly-awaited third volume in the Munro saga, which follows the fortunes of a fictional family caught up in the real-life drama of the long-running feud known as the Ayrshire Vendetta. The first two books in the series are Turn of the Tide and A House Divided. 1598.

The French Wars of Religion are drawing to an end, the Edict of Nantes establishing religious freedom in all but Paris. For the exiled Adam and Kate Munro, the child Kate carries is a symbol of a new life free from past troubles, despite their lingering nostalgia for Scotland and the friendship of the Montgomeries, But when Adam foils an attempt on the French king, Henri IV’s life, the whole family are called to court. There they find that religious tensions remain high, and Paris holds dangers as well as delights. For the Munros and Montgomeries alike, these are troubled times...

A tumultuous tale of pride and folly, loyalty and betrayal, treachery, peril, and ultimately justice, amidst the political manouvreings of both the French and Scottish courts, and set against the backdrop of the closing years of the 16th century and the continuing antagonism between the Cunninghames and Montgomeries, which has plagued Scotland for more than 100 years. 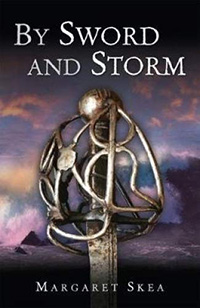