The Heart of the Run

'The Heart of the Run' has received the following comments from fellow poets:

"There is a rich seam of folklore running through Maggie Mackay’s first pamphlet, which is watched over by the presiding spirit of her mother. Mackay’s delight in the bounty of language is palpable, so when she invites you to ‘pour a dram of uisge beatha’, sit down at her table by the fire for a spell and warm yourself." - Helen Ivory

"Just as we are lulled by a fine malt whisky, we are summoned to where ‘the heart of the run is now’. With a touch of alchemy, we are transported to a land of ‘midnight and saffron’ where ‘dream castles float’ through deserts of sand, never forsaking the world of Gaelic mythology – of mermaids and lullabies, the hues of a Hebridean sunset. Lush with precious moments, these poems are a cornucopia of vibrant images all the way to the closing ghazal." - Alison Lock

From 'How to Distil a Guid Scotch Malt' to 'Ghazal', this pamphlet is packed with gems. Gems extracted from a mind which honours and cultivates experience, friendship, love and laughter. The language, both English and a sprinkling of Scots, sparks with energy. You see, hear, touch, taste and smell these poems, allowing you to accompany the poet on her sensory journey from Loch Maree to Lake Malawi.

Maggie’s positivity and energy capture the heart. Be prepared to be dazzled. Maureen Cullen Maggie Mackay is a jazz and whisky loving MA graduate of Manchester Metropolitan University. She has a fascination with family history which informs much of her work online and in print.

One of her poems is included in the award-winning #MeToo anthology, while others have been nominated for The Forward Prize, Best Single Poem in 2017 and 2018 and for the Pushcart Prize last year. Next year she begins a PhD in Poetry at the University of Strathclyde. ~ 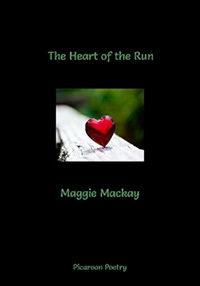