Seven Days of You

Sophia has seven days left in Tokyo before she moves back to the States. Seven days to say good-bye to the electric city, her wild best friend, and the boy she’s harbored a semi-secret crush on for years. Seven perfect days…until Jamie Foster-Collins moves back to Japan and ruins everything.

Jamie and Sophia have a history of heartbreak, and the last thing Sophia wants is for him to steal her leaving thunder with his stupid arriving thunder. Yet as the week counts down, the relationships she thought were stable begin to explode around her. And Jamie is the one who helps her pick up the pieces.

Sophia is forced to admit she may have misjudged Jamie, but can their seven short days of Tokyo adventures end in anything but good-bye?

Published by Little, Brown Children's in the U.S. and U.K. in 2017.
Seven Days of You also has homes in Germany (DTV Junior), Italy (Piemme), France (Pocket Jeunesse), Spain (Urano), and Brazil (Globo). Learn more at: www.ceciliavinesse.com 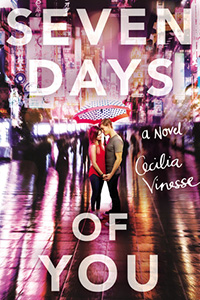