Over the years, I have written little more than a few poems a year...

That includes my first, faltering attempts as a teenager, as well as poems written in middle - going on old - age, when the creative impulse has come in bursts, but in which I believe I have found my own voice.Whether I have, and whether that voice is worth listening to, is for others to judge - but the audience, up to the present, has been largely limited to family and friends, with a few exceptions in the case of one or two poems published in poetry magazines.

Persuaded by Fyfe, our youngest son, to go 'public' through the online medium of a blog, I have posted more than 75 poems accompanied by appropriate 'complementary' images.They remain there - at www.thevanishedhour.blogspot.com - and friends and family who have read them have been kind enough to comment on them in positive terms:

The idea of finding images to accompany the poems was an echo - a sad echo - of the plan which Craig and I had - not long before his death - to put together and publish a collection of my poems, with Craig, a professional phorographer, providing the images. It was not to be. I will continue to write and post poems on the website, with pictures. But for this collection, the only picture is one of my own - taken one ice-cold weekend with Ann, Alastair and Craig in Abbey Park in Leicester more than forty years ago.

It is monochrome, and perhaps a little sombre - and that may be an apt description of 'The Vanished Hour', but if there is a current that runs through my poetry, then it is the power beneath a sometimes frozen surface - the power of love. Nothing is more important. 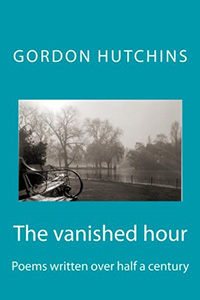