A Thin Sheet of Glass

Only a thin sheet of glass separates peace and insanity.

Schizophrenia. An illness with a label so devastating and treatment so harrowing, that in 1939 it could lock you away for life. When a second world war seems inevitable and you don’t know who to trust, how do you separate paranoia from reality?

Based on a true story, using real letters and personal accounts, this is a tale of love and courage beyond reason and against the odds.

Caught in the turbulence of the 1930s, with Fascism on the rise, Jane Deering finds herself drawn into the underground world of the German Resistance. From Berlin to Madrid, she witnesses brutality and carnage, delving into a darkness that exposes her deepest insecurities.

Torn between lovers – smooth-talking, married MP Walter and steadfast, loyal Richard – she is devastated when colleagues question her morality. As her relationship with her mother and her beloved brother breaks down, she becomes increasingly isolated.

When Karl, a university friend now working for the German Foreign Office, gets in touch to ask her a special favour, Jane begins to feel that she is being watched. She is surrounded by people who don’t understand there is little standing between them and the horrors in Berlin. Driven by her strong social conscience, she puts politics ahead of survival.Each step towards the enemy leads her closer to disintegration.

Pippa Beecheno’s A Thin Sheet of Glass is a dissection of a life destined to unravel. It is harrowing and uplifting in turns, as trust, hope and love are tested to the limits of endurance. 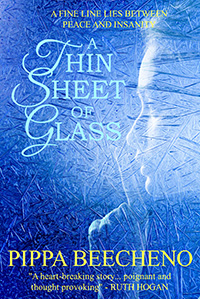